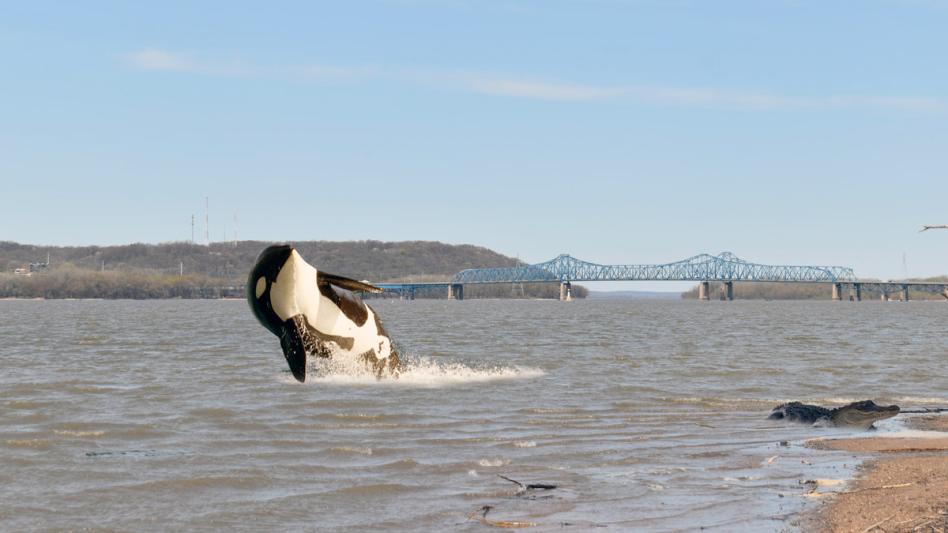 PEORIA — As invasive Asian carp species spread throughout the waterways of the United States, a joint effort continues between Illinois, Michigan and the Army Corps of Engineers to construct an anti-carp barrier on the Des Plaines River near Joliet. Closer to home, efforts are being made to keep the feisty fish from making their way through the Illinois River towards Chicago’s waterways to the lake. To halt the fish near Peoria, local officials have decided to release crocodiles into the river to eat the fish, and then killer whales to eat the crocodiles.

“Look, we don’t have the time or money for two high-tech fish walls,” said Paul Portokowzik, 53, the head of the Illinois Fish and Game Department, “so we had to think ‘outside the banks,’ a little bit. That’s a river joke, by the way. I’m full of those.”

Working with the Army Corps of Imagineers, a branch of the military for the children of Army officials who are otherwise completely unemployable, the Illinois Fish and Game Department announced its “incremental apex-predator introduction plan” to halt the spread of the carp.

“It’s just common sense, man,” said Col. Charlie “Cheese” Wilmot, 24, head of the Illinois River assignment for the ACI and self-proclaimed “big-dick pimp.” “What kills carps? Crocs. Easy. They’re stone-cold killas. But then you’re probably thinking, ‘but, yo, what eats a fuckin’ croc, man?’ But we figured it out: killer whales. Those fuckers are brutal, man. They eat anything they want! I’ve seen videos of them just thrashing some fucking seals. Crazy, dude.”

The current plan, to be carried out over the next several months, is to “dump a shit ton of crocs in the river” and then “wait.” Upon seeing that the population of crocodiles has brought the Asian carp population down, killer whales will then be released to eat the crocodiles.

Key critics of the proposal have noted that, much like the Asian carp species, crocodiles and killer whales are not native species to the Great Lakes area, and unlike the introduced carp, are unlikely to survive in the rivers. Critics have also noted that there are no known examples in the wild of whales eating crocodiles, but agreed “those fuckers really are brutal, they do try to eat everything.”

One element of the plan that remains foggy is how the Illinois River will handle the sudden influx of predatory creatures, and what will be done with the killer whales after they eat all the crocodiles. Many at the ACI have suggested that, due to the high intelligence of the whales, the  Illinois Fish and Game Department will be able to “just ask them to leave,” and the whales will find their way back to the ocean through local rivers, “Free Willy style.”