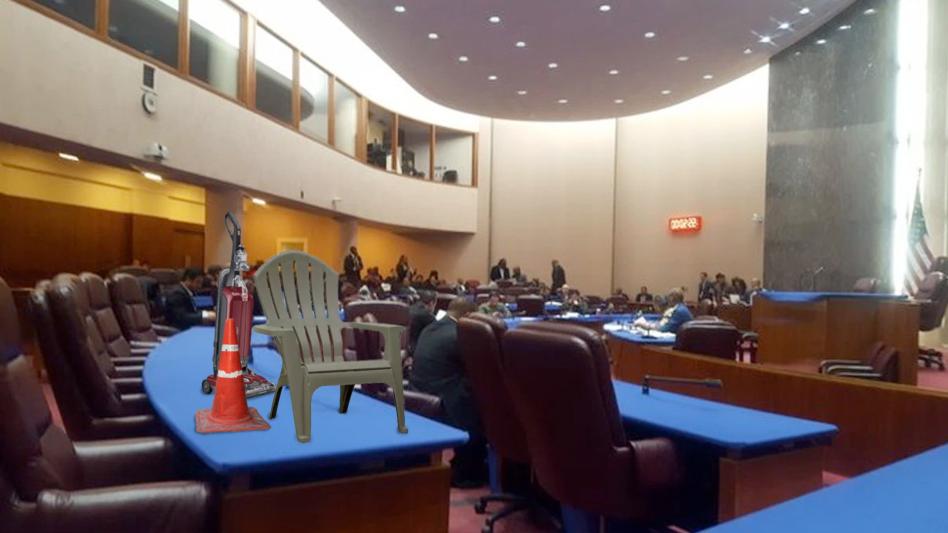 CITY HALL – After controversially beginning to remove “dibs” furniture across the 15th Ward this week, Ald. Ray Lopez found himself in the sights of an icy and angry constituency early Thursday. Upon entering the City Council chamber Thursday morning, Lopez and staff found the alderman’s seat in the chamber piled over with lawn furniture, an orange cone, and other “dibs” paraphernalia.

The alderman’s crackdown on dibs began in earnest on Monday, and Lopez claims at least nine truckloads of dibs detritus were removed from his ward since. “It’s my responsibility to resolve the complaints from my constituents who can’t park on their street,” Lopez said in an interview with the Chicago Genius Herald. “People are frustrated,” he continued, “because of dibs, and definitely not because Chicago’s snow response is almost criminally bad.”

Chicago’s dibs tradition dates back to 1892, when disgruntled Jackson Park resident Lois J. Dibs stalled the construction of the World’s Columbian Exposition for three weeks by leaving a butter churn filled with cement on the future site of the first Ferris Wheel, which was adjacent to her property. Ever since, Chicagoans have proudly claimed their hard-earned space in the snow in Dibs’ honor, and many are upset at Ald. Lopez’ disrespect of this tacit understanding.

Upon finding his seat “dibbed” in this extreme manner, Lopez sighed, “I thought it might come to this,” before beckoning several circle-saw-wielding staff forward to begin the cleanup effort. “I won’t let it stop me,” Lopez told the Genius Herald. “In fact, I’m only getting started,” he growled, a wild light in his eyes.

Just before press time, both Ald. Lopez’ Brighton Park and West Englewood offices were found filled floor-to-ceiling with chairs, and Ald. Lopez was en route to the 15th Ward with a chainsaw. The Chicago Genius Herald will keep you updated as the situation develops.