THE LOOP — According to sources early Thursday morning, a man, maskless as if it was June 2019, sat down on a southbound Brown Line train during morning rush hour. According to witnesses on the train, it was likely the man was a time traveler who’d traveled forward in time and was unaware of what had occurred over the last year.

“As soon as he sat next to me, the hairs on the back of my neck stood up,” said Tony Carol, 35, a data analyst who sat next to the maskless man. “I felt as if I were witnessing that part of Terminator 2 where the Terminator appears in a ball of lightning from the future and cuts off part of a tractor trailer. I don’t know if that also happened in the first one because I haven’t seen it. What I’m saying is it was obvious he wasn’t from this time.”

The man, name unknown, reportedly kept making meaningful eye contact with other passengers on the train, as if checking to make sure the 2021 version of himself wasn’t on the train to avoid any rips in the time continuum.

Carol, who has been begged into returning to his office job by his supervisor, said this wasn’t his first brush with a time traveller.

“When I was eight my family went to Disney World and I thought I saw a time traveling Civil War soldier wandering around the park. Turns out it was just an actor from a show they were doing outside the Hall of Presidents, but still, for a second I was like ‘whoa, is he here to hunt the last living relative of Lincoln?’”

As the maskless man disembarked the train at Merchandise Mart, Carol reported a noticeable release of tension amongst the other passengers.

“It was like everyone knew,” said Carol, “the moment he got off everyone seemed to breathe easier. That guy was definitely on a mission to the future. Either that or he’s just some contrarian asshole who refuses to wear a mask on the train as some sort of half-assed protest daring people to say something. Unfortunately it’s impossible to tell which one is which, so I’m going to be safe and assume Terminator.” 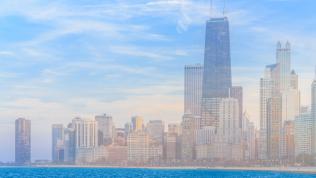