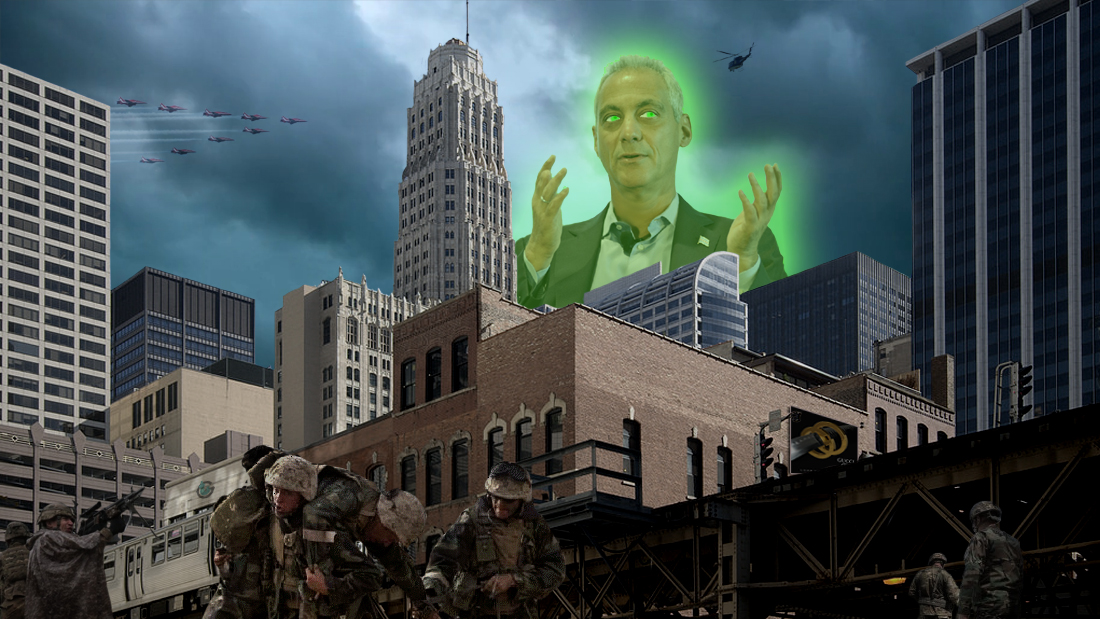 LAKE SHORE PARK—Bad news for people who regard Chicago’s most well-known display of our military air superiority as little more than a nuisance that creates a lot of noise pollution, it seems. The mayor’s office has just announced that due to the military’s failure to contain the giant, radioactive Rahm Emanuel currently laying waste to the city, the Air and Water Show will be extended indefinitely.

“At this point it’s safe to say that we got overconfident and assumed the Air and Water Show was the perfect opportunity to neutralize Mr. Emanuel,” announced Mayor Lori Lightfoot in an impromptu televised broadcast hosted from an undisclosed location. “But unfortunately that wasn’t the case, and we regret the inconvenience the prolonged Air and Water Show will have on residents.”

The first indication that things weren’t going to plan came early on Saturday morning, when Mr. Emanuel, now a 50-foot-tall glowing monstrosity capable of exhaling a devastating atomic heat ray, made his way to the Lakefront from the now-destroyed neighborhood of Ravenswood. Members of the Royal Air Force Aerobatic Team’s Red Arrows were dispatched to contain Mr. Emanuel. Regrettably, the 30mm ADEN cannon fire the Arrows’ Folland Gnats were equipped with proved ill-suited for piercing the former mayor’s formidable radiation-enhanced hide, and several of the aircraft were destroyed before they managed to retreat to a safer distance.

“Yes, well—stiff upper lip and all that, ‘who dares wins,’ and et cetera et cetera,” said Red Arrows Squadron Leader Martin Pert, currently recovering from radiation burns in Rush University Medical Center. “The boys knew the take and it’s been an honor flying with the RAF. Just don’t forget who softened the big bruiser up for you when you finally give him the old heave-ho, eh?”

Whether or not Mr. Emanuel has actually been “softened up” remains to be seen, however. Multiple videos uploaded to the internet following Sunday’s severe thunderstorms appear to show the former mayor standing in Lake Michigan and slowly growing larger before loudly yelling “Skreeeonk!” as though drawing power from the lightning strikes. A number of media personalities, most notably in New York and California, have begun to insist that the only way to stop Mr. Emanuel is with an immediate nuclear strike on the city, but speculation abounds that this would only make the former mayor stronger.

In the absence of the Blue Angels offering to combine and form their formidable super robot Skylord Lapis Omega, a shadowy and mysterious professor from Japan named Dr. Chosei Itagaki and his plucky young assistant Ritsuko have allegedly been working with the mayor’s office on the construction of a massive, mechanized Rahm Emanuel capable of stopping our former mayor. Details surrounding the project remain expectedly scarce, and it’s uncertain whether this “MechaRahm” will be ready in time to curtail further damage to the waterfront and Loop neighborhoods.

As of press time, Emanuel appears to be transfixed by his own reflection in The Bean, but for how long this will hold his attention is hard to say.