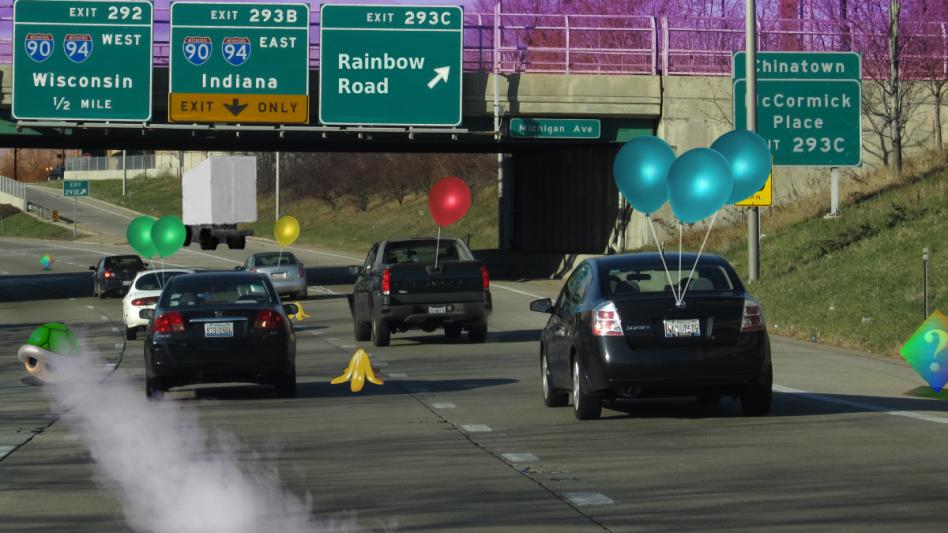 DAN RYAN EXPRESSWAY — In a move inspired by the Biden Administration’s forthcoming infrastructure plan, the Illinois Department of Transportation implemented a surprisingly effective measure this week to curb the Dan Ryan Expressway’s notorious traffic: installing speakers on the roadway that will serenade motorists with the “Toad’s Turnpike” course soundtrack from Mario Kart 64.

After installing the speakers overnight Wednesday, IDOT reported that drive times from the south suburbs at rush hour had already been reduced by half or more, thanks to every single driver constantly holding their foot all the way down on the accelerator and executing perfect drift turns through the Dan Ryan’s curves. “We expected the results to be impressive,” remarked IDOT representative and sociologist Dr. Marcie Cheiroballistra, 43, to The Chicago Genius Herald. “but Illinois drivers have already far outpaced the track records we set in our, uh, modeling software.”

Dash-cam videos documenting the Dan Ryan trip this week show what appears to be chaos on the expressway, inspired by Nintendo composer Kenta Nigata’s manic masterpiece: commuters careening down the express lanes at top speeds and lobbing trash through open car windows and sunroofs to distract and delay the “competition.” However, Dr. Cheiroballistra is confident that these are just growing pains

“In our models, we found that as commuters get used to the new ambience, they will rely less on items and more on driving skill to complete the trip faster, so we’ll see less of this as time goes on, along with even faster top speeds,” Chieroballistra said.

IDOT hopes to expand the program as they receive funds from the federal government over the next year; installation has already begun on Lake Shore Drive’s “Koopa Troopa Beach” sounds and, of course, “Rainbow Road” for the Eisenhower. Chicagoans seem cautiously excited about the changes. “I can’t wait to hurtle through the Wacker Drive exit at 90mph while scream-singing that high note in “Rainbow Road.” I can already visualize the Toad-shaped fireworks,” said Garrett Heck, 30, an IT security specialist. “The memories alone will be worth the inevitable mountains of wreckage.”

At press time, the Genius Herald news van is currently in 2nd place. May God have mercy on us.