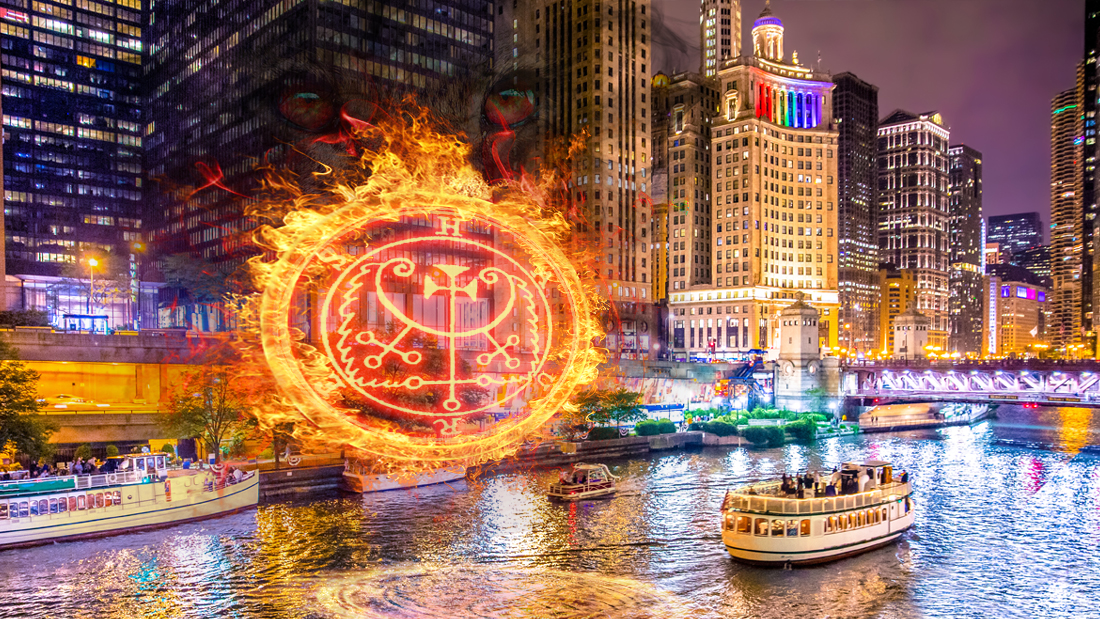 CHICAGO RIVER — In the middle of a particularly animated portion of his riverboat tour Wednesday afternoon, Chicago Architecture Foundation tour guide Ryan DeWitt unknowingly began to trace the profane sigil of Flauros, Great Duke of Hell. DeWitt’s enthusiastic gestures towards Chicago’s midcentury masterpieces immediately began summoning the demon and his thirty-six legions to our mortal plane, a hail of fire emitting from the top deck of Chicago’s Classic Lady.

The assembled international tourists and weekenders from Glen Ellyn reeled in horror at the flame-wreathed portal opening above DeWitt’s outstretched hand as the tour guide’s last few words on Bertrand Goldberg’s vision of Brutalism hung in the air. DeWitt faltered and recoiled from his still-glowing fingers, which until recently had only had the power to educate and delight Chicago tourists intent on learning more about “The Architecture Capital Of The World.”

DeWitt backed up against the Classic Lady’s cabin and faced the portal as the 8-foot visage of Lord Flauros emerged, leopard head sneering and giant claws dripping with the blood of the damned. “THOU HAST SUMMONED ME WITH MY TRUE NAME AND SIGN, MORTAL. WHAT FELL PURPOSE DOST THOU PURSUE,” His Infernal Excellency screeched. Several tourists fell unconscious at Flauros’ cursed intonations, and DeWitt’s ears began to bleed as he babbled a mission statement for the Chicago Architecture Foundation in response.

“The problem is that the guy simply lacked a magician’s tone of command, or any mastery of the Black Speech,” local necromancer Todd McManus, who was on the boat with his parents, told The Genius Herald later. “He could have at least put down a quick arcane triangle with which to bind the demon lord and force him to speak truth to mortals, but I suppose he was an amateur. Great tour though - really informative, but kept it fun.”

Fully unrestricted by these basic conjurer’s wards, Flauros messily devoured a passing seagull and flapped a massive pair of leathery wings, alighting upon the State Street Bridge above the boat. “IN THY IGNORANCE OF THE ANCIENT WAYS THOU HAST BROUGHT THE PLAGUE OF MY LEGIONS UPON THY CITY, MORTAL, ALTHOUGH THY LOVING CRITIQUE OF MODERNISM WAS UNUSUALLY THOUGHTFUL FOR A TOURIST PROGRAM,” Flauros growled. More in the crowd threw themselves off the deck as the stink of brimstone choked the air and lesser demons poured from the portal. Flauros paused and admired the nearby London House before regarding DeWitt again.

“I SHALL REMAIN ON EARTH FOR ONE HUNDRED YEARS, WREAKING BLIGHT AND DESTRUCTION WHERE I WIL’T,  IN PUNISHMENT FOR THY FOOLISHNESS. BUT IN THE MEANTIME THOU SHALT INSTRUCT ME IN “WHY DESIGN MATTERS,’ AS THOU SAY’ST, AND REWARD THEE WITH AN EARLDOM IN HELL IF THY TEACHING BE GOOD,” Flauros proclaimed. The demon lord and his legion then commandeered Chicago’s Classic Lady for their own, immolating several police boats that had gathered on the scene. At press time, a terrified DeWitt was giving his thirtieth consecutive tour to an appreciative audience of several Great Dukes, with no sign of his infernal contract ending anytime soon.