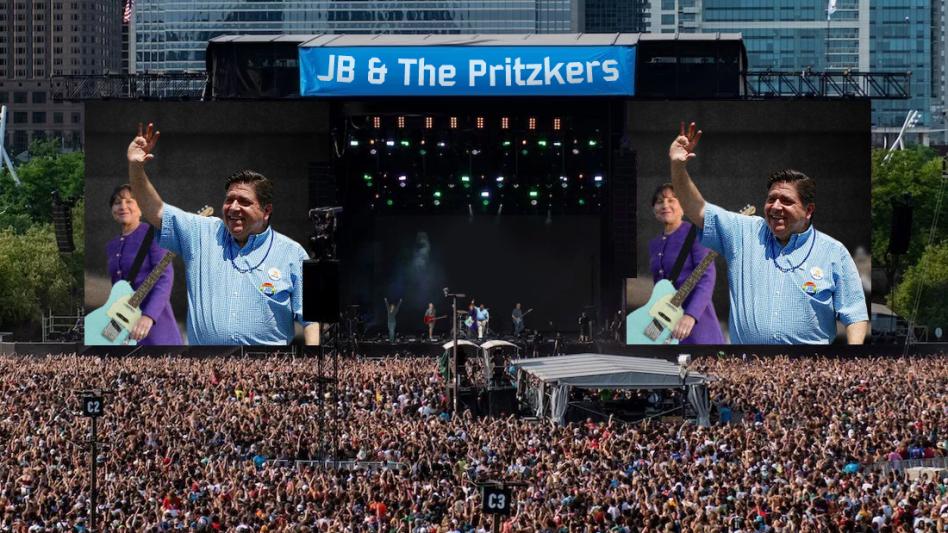 GRANT PARK—Adjusting the strap to her Fender Telecaster, Penny Sue Pritzer, 60, prepared for her headlining set on the final day of Lollapalooza. Penny, along with brother Anthony, 58, and cousins Karen Pritzker, 60, Linda Pritzer, 65, and Matthew Pritzker, 37, forms the band JB and the Pritzkers, a rock group often noted for the sizable net worth of its members. “People like to say we’re only headlining Lolla because we’re one of the wealthiest families in the United States and because our brother is the governor of Illinois,” said Penny, kicking a stage amp with a $2,000 Manolo Blahnik boot. “But the fact is we all really love rock and roll, and we worked just as hard to get here as Ariana Grande and Flume.”

Sipping hot water with lemon, lead singer Linda Pritzker was focused on leaving it all on the stage. “Usually the people at our shows know what they’re in for,” she projected in a stage whisper, gesturing to the “On vocal rest” button neatly pinned to her lapel. “Because they’re our spouses, children, and extended family, our die-hard fans know all the words to our songs, even the deeper cuts from our unreleased 2004 album Too Big To Fail. But with this crowd, I see the opportunity to gain a bunch of new young fans who are interested in entrepreneurship and philanthropy.”

JB and the Pritzkers, a project originally started by Penny and Linda for the 1999 Pritzker family reunion at the family’s private Lake Michigan island, quickly snowballed into a passion project for the family. “Penny Sue got it off the ground, and after playing our first set to our family, we quickly realized that this was what we wanted to do professionally,” Linda said, revealing a perfect set of ivory veneers with a smile. “Getting our siblings involved was easy, especially since Karen had owned a couple of Elvis’s Gibsons for a while and was meaning to take lessons. I think it just felt right to all of us.”

When asked about the disparity between their plum spot in the Lolla lineup and their <1,000 Spotify streams, Linda rolled her professionally whitened eyes. “Listen, we sent in an audition CD just like everybody else.” Matthew Pritzker, overhearing this on the way to yell at a sound tech about synth levels, nodded in agreement. “Cousin JB listened to a bunch of the submissions that the Lollapalooza Committee received, and he said ours was one of the strongest by far. Sure, we may have invited a few committee members out to the Pritzker Estate in LA, but that hardly factored into their decision-making process.”

As the crowd gathered around the T-Mobile stage, the band members tuned their instruments nervously. “Okay guys, this is it,” said Penny, grabbing the hands of Linda and Matthew as the band’s private security herded hesitant groups of festival-goers closer to the stage. “Let’s go show them what we’re worth.”