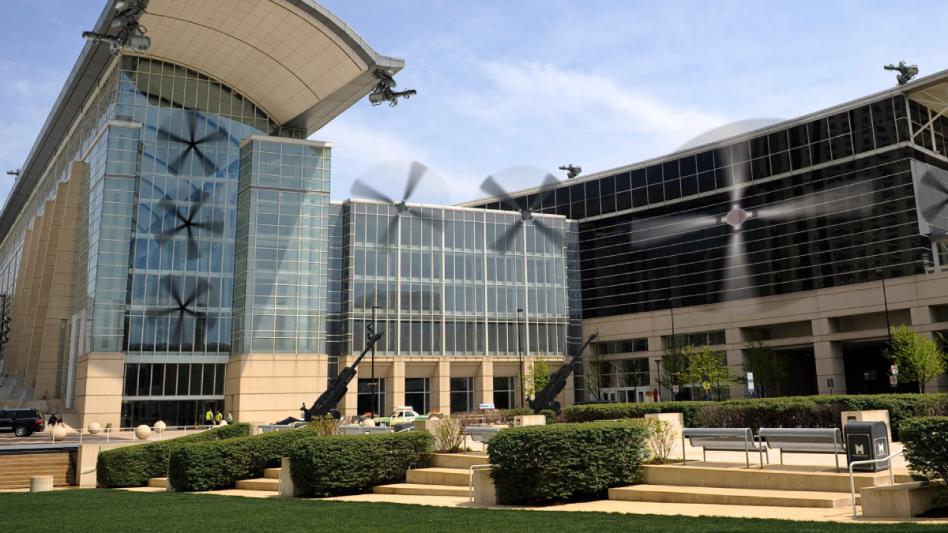 NEAR SOUTH SIDE — Citing a recent study finding that their internal lighting causes nearly 200 birds a night to crash into their windows, Chicago’s McCormick Place is making some changes. The downtown convention center is planning to install whirling blades, auto-turrets, and several other top-secret, experimental anti-bird weapon systems in an effort to increase their nightly bird kills.

“200 birds is certainly a lot of birds,” said Gregory Paulman, 49, Director of Building Operations at McCormick Place, “but we think we can do better. Frankly, a building of this size should be killing birds in the thousands, not hundreds. We’re hoping we can increase the center’s external weaponry—which is unfortunately currently at ‘none’—in an effort to get our numbers to ‘oil spill’ levels of bird murder.”

As part of a multi-phase plan to turn the building into a “bird scourge,” workers will be installing whirling blades to key areas of the building where birds might congregate or fly by. McCormick Place has assured The Chicago Genius Herald that these surgically-sharp metal blades are capable of spinning at such high speeds that they are nearly invisible to birds’ eyes.

“We’re in the bird killing business here at McCormick Place, but we’re not monsters,” said Paulman, “we want to kill these birds as painlessly and efficiently as possible. If there was a better way—like, say a button that killed every bird on Earth—I’d be mashing it. It would save us money, that’s for sure.”

The installation of the bird-killing whirling blades alone is set to cost McCormick Place millions, but the addition of auto-turrets is estimated to cost far more. The proposed weapon system—gyroscopically mounted miniguns capable of targeting birds flying within range of the building—has never been installed on a convention center in a densely populated city downtown.

Not everyone is excited about the changes to McCormick Place. Wildlife advocates and concerned citizens have noted that the addition of spinning blades, automated machine guns, and the newly-proposed construction of a “bird obliteration ray” are taking the effort to maximize bird carnage to unnecessary levels.

“I just think this is an example of hostile architecture run amok. It’s bad enough our city keeps employing modified benches and spikes to keep the homeless from having places to sleep,” said Allison Torres, 36, a Hyde Park resident, “but arming McCormick Place with a supersonic cannon that turns birds’ bones into goo? That feels like crossing a line.”

“We submitted this study on the McCormick center as an advisement that simply turning down the lighting would reduce bird deaths,” said Benjamin Van Doren, who wrote the study with the assistance of Field Museum bird experts, “it was in no way a ‘dare’ for McCormick Place to increase the number of bird deaths around the building. What is wrong with you people?!”

“I was frankly disturbed by the study from the Field Museum when I read it,” said Paulman, “I thought our bird kill numbers were way higher! I kill birds all the time—mostly with my hands or a big stick. I’m thankful that the institutions in this city can come together to solve problems and work together. I hope the Field Museum is ready, because in the coming months McCormick Place is going to send our friends at the museum campus basket after basket of freshly killed birds for their collection or maybe to eat. Their call, they’re the experts!”

As the convention center reopens, visitors can expect to see the new changes to McCormick Place in action. Cosplayers to the center’s frequent entertainment expos are encouraged to avoid dressing as winged characters.