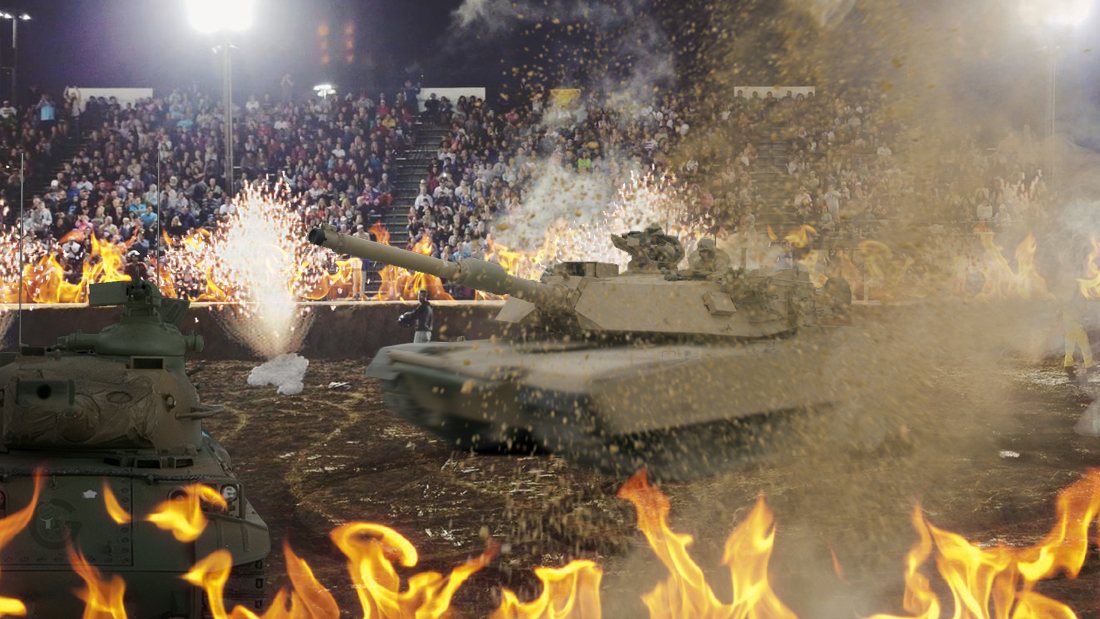 For Fitzsimmons, the need for a spin-off to the annual summer event became apparent during this year’s flight demonstration by the famous Air Force stunt squadron, the Blue Angels. “I was looking up at those beautiful blue planes zipping around the city in flawless formation, and suddenly had the thought ‘how tight would it be if one of those bad boys just launched a missile right into a building?’ Not like one with anyone in it, of course, like a disused public school or something. And then I thought, ‘water and air are pretty cool, but so are earth and fire.”

“You know how boats are like ‘blommmmbloooooom’ and planes are like ‘SKRREEEEE foooOOOOM?’ Well explosions are like ‘kaBOOOMMSSSHR’ and monster trucks are like ‘Va-VROOOOM!’” Fitzsimmons explained, wiping spittle from his mouth. “People love that shit. The idea is a slam dunk.”

The week-long event will be held in and around Soldier Field and will feature various earth and fire-themed exhibitions like mud wrestling, monster trucks, fireworks, and bonfires all culminating in a pitched tank battle with the US Army’s “Dirt Angels.” “If people thought seeing a sailing regatta was fun, wait till they see this big hole we’re digging. Just straight down, tossin’ dirt behind us like a dog!”

The Hole exhibit will include professionally dug holes, amateur holes, and a special hole for kids. Linda Edison, a publicist for Mayor’s Office, highlighted the excitement of the child hole. “Kids are going to love our Minecraft-inspired hole. Just like the popular video game, the hole offers a real digging experience.” Adult activities are also scheduled, including a mud spa tent, pottery classes, and a therapeutic “hole filling-in” experience where adults can bury things that make them feel ashamed.

Fire fans will also find plenty of sights, sounds and smells to enjoy at the four day event. Nightly bonfires and fireworks displays are planned, along with an open-fire food court. “We brought in one hundred of America’s best barbeque chefs and partnered them with an at-risk teenager with pyromaniac tendencies, and gave them all lighters, and told them to learn from each other,” said Juan Ebensia, the event’s culinary program coordinator, “am I afraid the whole festival will go up in flames? Of course! But its wild unpredictability is what makes fire so fun! One rule we have: No. Fucking. Firefighters. Allowed.”

The Dirt Angels’ own Captain Rick Welles described his excitement for the show, “it’s about time the Dirt Angels got their due. Those fancy-pants flyboys always get all the attention and I can’t wait to rub their noses in it with two hours of tank treads churning up mud, doin’ donuts to the hits of Daft Punk! We’re going to run over some cars and shit, fire a couple of live ordinances into an old school bus, just really show those cloud-humpers who the real pilots are!

The Earth & Fire Show is still in its planning phase for next year and is expected to announce an official date as soon as the organizers can “get a shit-ton of shovels.”