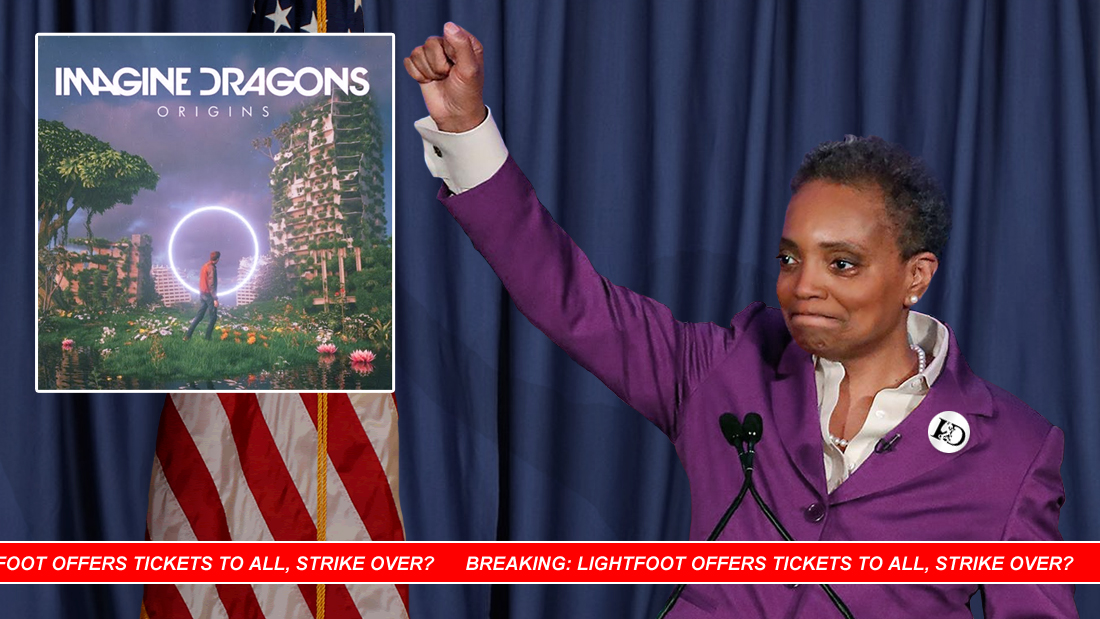 THE LOOP — Exciting news for students, parents and especially teachers in the Chicago school system comes early today as Mayor Lori Lightfoot has announced she will be giving all the striking teachers tickets to see Imagine Dragons at Lincoln Yards when it opens. Talk about watching the Democratic Machine in action!

A jubilant Lightfoot announced in a press conference outside City Hall this morning that she had ended the strike with this stunning and magnanimous gesture to the picketing educators. “The Chicago Teachers Union has showcased incredible passion throughout this past week,” Lightfoot said. “I can’t think of a better way to reward that passion and direct action than with complimentary tickets to one of America’s best contemporary pop-rock bands.”

Lincoln Yards, currently slated to cost $5 billion with no prospective break ground date and rife with criticism from constituents and policymakers alike, is the perfect place for these teachers to celebrate going back to work. Reps from the Teachers Union, whose demands would currently cost around 1/5th the sum of the development and spread over three years, are elated at this generous offer from Mayor Lightfoot.

“That’s...not actually how any of this works,” said a nonplussed rep for the CTU, presumably stunned into speechlessness by the opportunity to see the pop megastars responsible for “Radioactive,” “Thunder” and “Whatever It Takes.” “We’re currently still negotiating. Mayor Lightfoot can’t just...we’re not interested in tickets to Imagine Dragons.”

What’s even better is that Lincoln Yards developer Sterling Bay is generously offering to provide the striking teachers with 500 coupons good for half off a Chicago-style dog inside Lincoln Yards with a purchase of five dogs or more. “We’re excited to be a part of this momentous moment for labor relations,” a spokesperson for Sterling Bay said via email. “Additionally please note these coupons are only good until September 2020.”

Even better, with the $216 million Lightfoot has saved at the negotiating table, which itself accounts for approximately 1/25th of the projected cost of Lincoln Yards, the Mayor has announced that she’s going to spend it on making the target practice sheets used in the city’s forthcoming Cop Academies even more terrifying to look at.

All in all, the city can breathe easier now that Mayor Lightfoot has dealt with this strike with a little good old fashioned know-how. It just goes to show you that when people start being polite and talking things over, good things can happen.