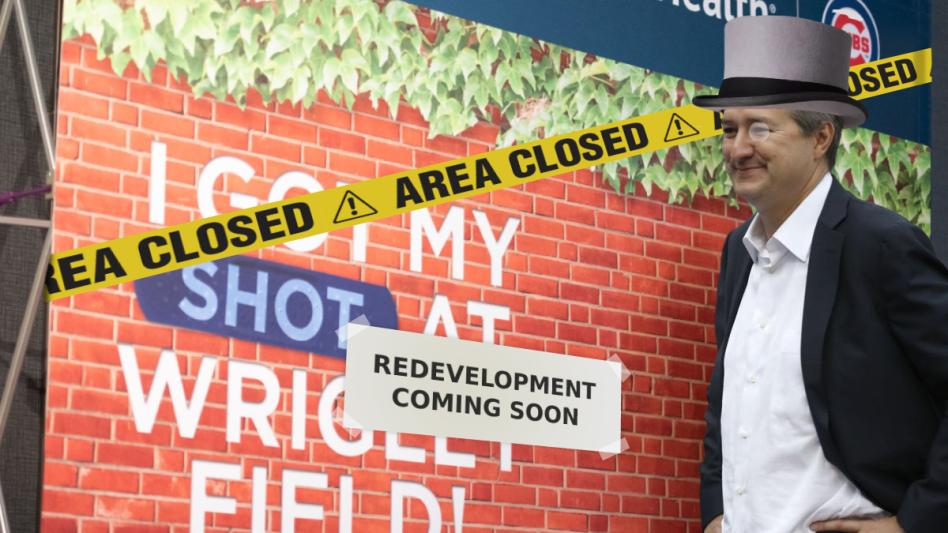 WRIGLEY FIELD — Barely a week after opening, a new COVID-19 vaccination site at Wrigley Field has been shuttered, the latest in a series of seemingly inevitable business closures due to the Cubs / Ricketts redevelopment plan for Wrigleyville.

North Side residents hoping to secure a vaccine appointment at the site this week were met with busy signals and boarded windows after a surprise press conference from Tom Ricketts, who announced the closure alongside new plans to tear down and redevelop the space. The Ricketts and Cubs organizations plan to remove the site, which has occupied space in the brand-new American Airlines Conference Center adjacent to Wrigley Field, in favor of “a suite of new, soulless luxury amenities to complement the Wrigley experience, now that vaccinations have begun to draw even more foot traffic to this location.”

Ricketts expressed his gratitude to the vaccination site “adding to the incredible legacy of Wrigley Field” in the few days it has been open, but reiterated that it was “time for a new chapter” involving “drinks at ‘Wrigleyville prices,’ buildouts for local restaurants that have another location less than a mile away, and certainly another place to buy a hat.”

Ricketts was vague on how this new construction would occur inside the existing conference center, but emphasized the importance of breaking ground right away. “I know a good thing when I see it, and then want to destroy it for my family’s gain,” Ricketts said, adjusting his trademark cravat. “And a vaccination site at Wrigley is just too good to be true.”

When asked about how this plan would affect unvaccinated Chicagoans as COVID-19 cases rise, Ricketts asked, “oh, is that still happening?” before lighting a massive cigar labeled “FAT CAT” with a $500 bill and adding “how droll!”

Seemingly as an afterthought, Ricketts suggested to reporters that he might consider reopening the vaccination site in the ‘Joe Ricketts Stands for the Squalid’ completed last year, before being reminded that the structure was immediately condemned by the city upon opening. “Well then, the city doesn’t need our help to equitably distribute the vaccine, as I know they do an incredible job with equity already,” Ricketts said, running a finger along the inside of his top hat and sniffing it with pleasure. “Besides, if I know Wrigleyville residents, they generously want other places to be equitable first.”

Ricketts concluded the press conference by thanking his family and investors for their continued support of the Wrigleyville redevelopment project. Chicagoans who had gathered hoping for a vaccine collectively sighed and walked across the street to Big Star Taco. “It’s not even close to the next best thing,” one was heard to say, “but I guess it is right there.”