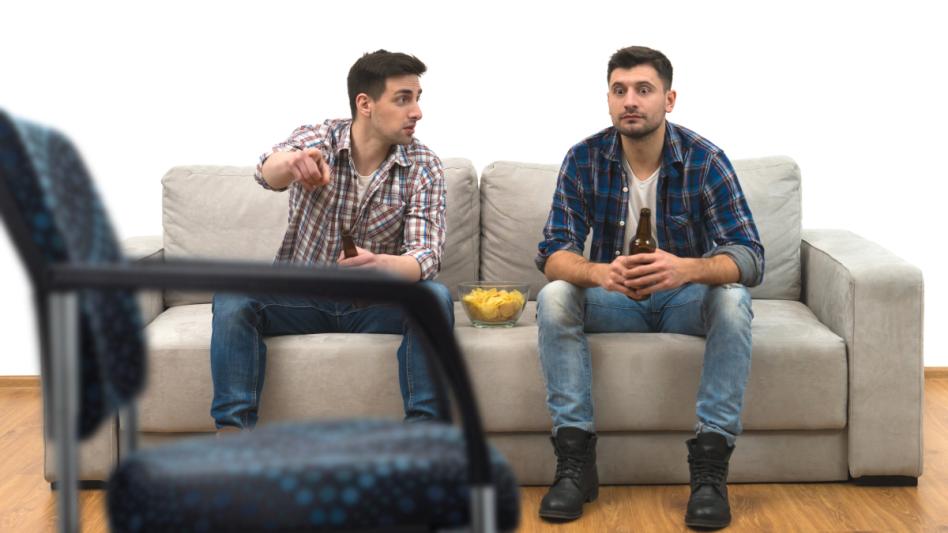 ALBANY PARK — As more and more Americans are forced to resume normal life by the people who pay them, people are beginning to expand their social “pods” and allowing more friends for in-person, maskless visits. Lukas Branton, 32, a customer service specialist, was excited to be able to hang out with his longtime friend, Daniel Castello, 34, a friend from college and former co-worker, but was concerned with how many people in Daniel’s social pod seemed to be imaginary.

“I was psyched when Danny texted me to hang,” said Branton. “I have a roommate, but I’ve been working from home since last March and I felt like I was getting pretty stir-crazy. I was a little wary when Danny said a couple of his friends would be joining us, but I was even more wary when I got there and they didn’t exist.”

Castello, who’s lived alone since his roommate moved back home in June, has reported his time in pandemic-related isolation has been “tough, but made easier by his new friends.”

“We walked into his apartment and he started introducing me to everyone,” said Branton. “There was Max, Duchess Venessa, and Gloforgon the Inscrutable. But I was so excited just to have anyone to hang out with that I went with it, shook some imaginary hands, hugged some imaginary bodies. It was kinda nice, even if it was pretend.”

During their nearly three hour hangout, Castello, Branton, and Castello’s imaginary friends watched TV, ate some chips, and talked about what they’d been up to during the pandemic. According to Branton, Castello repeatedly asked questions to the three imaginary members of the social pod, and took long, silent pauses to listen to them and respond.

“It was whatever, but he kept cutting me off to laugh at something Duchess Venessa said,” said Branton. “I’m like, fine with not playing Playstation because ‘the Duchess finds violence abhorrent,’ but I’m not going to sit there while she makes shitty remarks about my ‘upbringing.’ I felt like I was kind of getting Max on my side by the end. Danny said he’s a big, green dog, and dogs really like me. Gloforgon, though, no clue what’s up with that guy.”

Despite some tension during the hangout, Branton said he plans to continue to hang out with Castello’s social pod, and has agreed to host the quartet next weekend as long as his roommate, a flying space cat named Tony who only Branton can talk to or see, doesn’t mind.