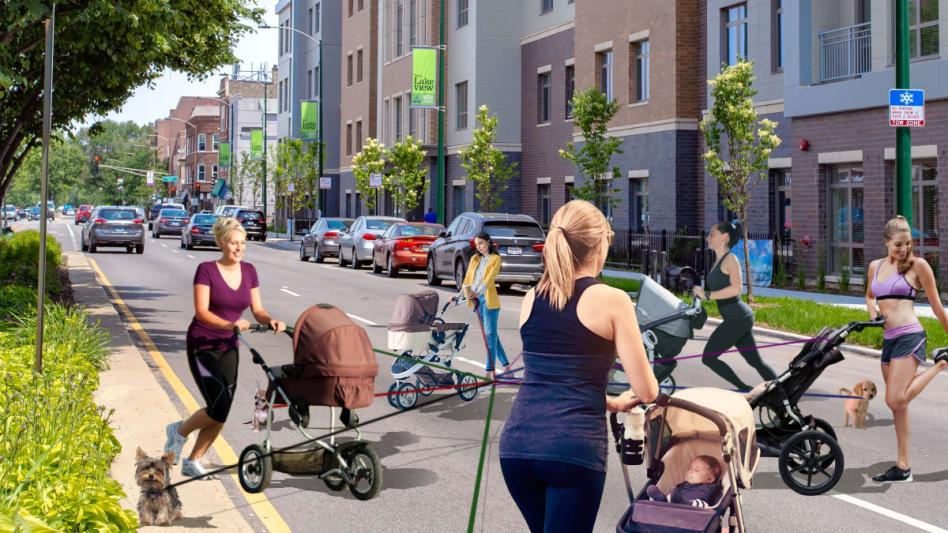 LAKEVIEW — Over the past few years, the Southport Corridor in Lakeview has become a haven for local affluent families. With amenities like an Anthropologie, Lush cosmetics and a Jeni’s Fine Ice Creams all within a stone’s throw of each other, it’s safe to say this block is nothing short of a rich mom’s paradise. And its reputation as a monied mommy Mecca was further bolstered this weekend, when several Southport moms got tangled up and created a Mom King.

According to bystanders, the incident occurred on the corner of Southport and Addison when local mom, Tracey Wentz, 34 and her dogs Oogie, 3, Poogie, 4 and The General, 9 exited Dogaholics and collided with local mom, Stacey Lentz, 34, who was pushing her stroller past Café Tola. From here, they picked up Lacey Kentz, 34, a local mom and her gym tote, 5, both on their way to the Soulcycle, as well as local mom Macey Tentz, 34, who was picking up a pizza for her family at D'Agostino's.

“I’d never seen anything like it,” said Gavin Slaw, 45, a manager at Discover CBD. “It was a whirlwind of lululemon tank tops and UGG boots. Dog leash here, gym tote there, pizza here, stroller there. Everything just came together perfectly. Almost like it was how nature intended.”

Following the initial collision, observers reported the four moms attempted to untangle themselves to little avail. The harder they tried to untangle from each other, the stronger the knot became. After hours of being tangled up, the four matriarchs began speaking in perfect unison, unable to produce any individual thoughts or words. It wasn’t long after that when they made it clear that they were now sharing a singular consciousness named “Gaea Southport.”

“At that point, they all shouted at the top of the lungs, ‘Hello, my children. It is I, Gaea Southport. I am your mommy and I need some me-time’,” recalled Slaw. “The creepy thing was that when all of their voices came together, they actually did sound exactly like my biological mother.”

Gaea Southport then began to travel down the Southport Corridor, reeling in and absorbing more moms as she passed them. By the time she reached the end of the block, the Mom King was nearly twenty moms strong, and growing.

“The larger she gets, the stronger her magnetic pull seems to be,” said Slaw. “I started seeing moms from blocks away just drop everything and start walking toward Gaea Southport, completely willing to join her.”

As of press time, Gaea Southport consists of thousands of moms tangled up together on Southport, spanning as far south as Southport Lanes and as far north as Music Box Theater.

If you’re looking for a mother figure in your life, get over to Southport Corridor today!