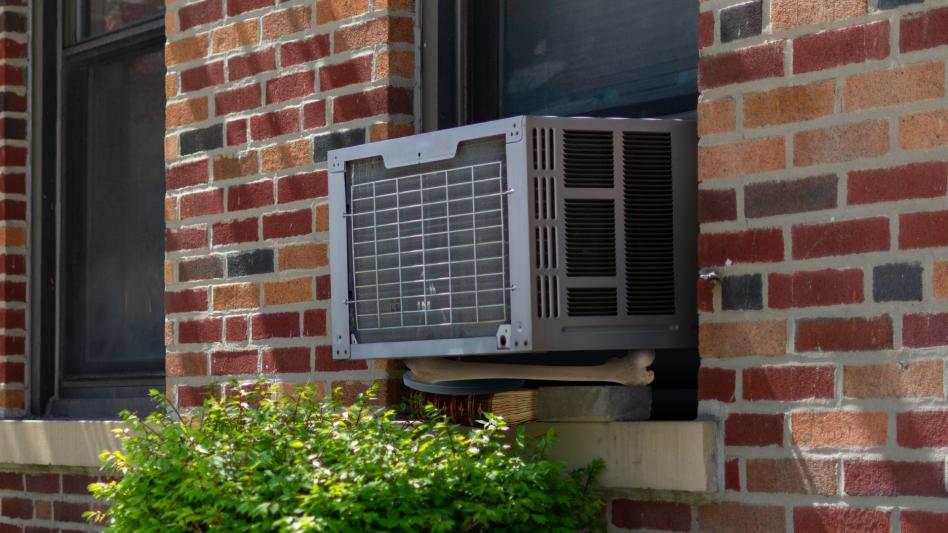 BRIDGEPORT— After last week’s heatwave, Chicagoans are looking for ways to keep cool as summer approaches. Many in the city turn to window AC units, self-installing these heavy appliances or having their landlord’s cousin take care of the cumbersome task. While trying to steady their AC units, some turn to common household objects. Oscar DeVegas, 53, installed his AC unit over the weekend, balancing it with a brick, a plate, a book and a human femur.

“It’s important to make sure the unit is steady,” said Oscar DeVegas, a Fedex driver, “If you don’t it could fall and Looney Tunes somebody. So I just grabbed some stuff from around my place: my favorite brick, a plate I didn’t feel like washing, a copy of my novel that went nowhere, and a human femur.”

“Thing’s in there as solid as a rock. I’d like to see my landlord’s cousin do such a good job.”

With extremely high temperatures expected this summer, DeVegas was proud to have installed his AC unit so early and so well.

“Yep, I’m pretty damn good at stuff like this,” said DeVegas, “you probably noticed none of the chairs and tables in my place wobble. Sturdy as an ancient redwood! I got matchbooks, decks of cards, and DVDs of the movie I made that didn’t get released under all my furniture.”

When asked where he found the human femur, DeVegas assured this Chicago Genius Herald reporter that the bone was obtained in a normal fashion.

“That’s my dad’s leg bone. He left it to me in his will,” said DeVegas. “I’ll always remember what he said to me as he laid in that hospital bed. ‘Son, take my leg bone. When the moment is right, you’ll know what to do with it.’ Then I needed something about two and a half inches wide to really get that AC unit steady and there it was, the moment my dad had waited for.”

“It’s going to be a beautiful summer,” DeVegas said, wiping tears from his eyes.