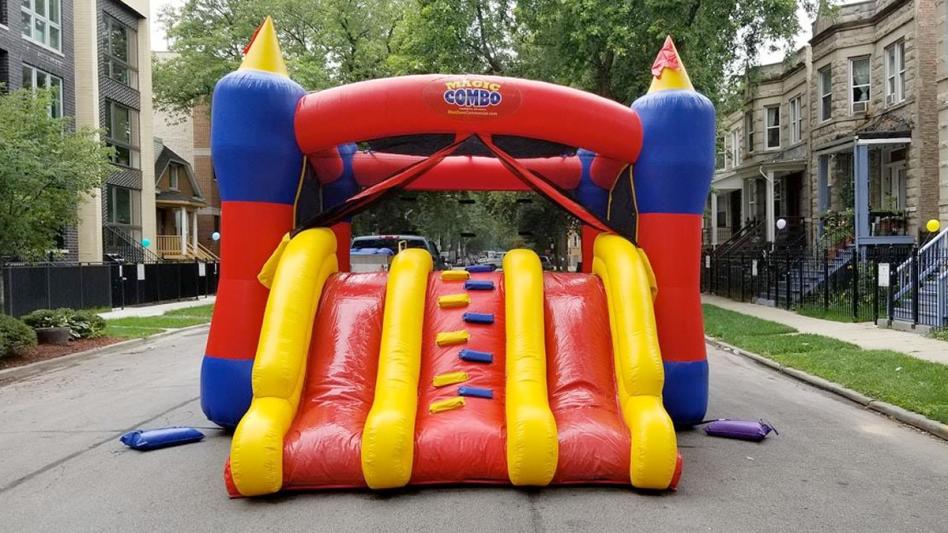 BUDLONG WOODS — As Summer break ends for Chicago’s youth, communities around the city are coming together, shutting down streets, and hosting block parties. This Saturday, the stretch of Sunnydale between Washtenaw and California was closed for a block party that was clearly just one family that really wanted to rent a bouncy castle.

“Yeah, I was pretty sure we’d canceled our plans for the block party this year,” said George Lopez, 57, an actor, but not the famous one, “a lot of the families on the block were going to be too busy traveling to see family they missed to  attend the party, and the Kirkmans did not take it well.”

The Kirkman family — Brian, Lydia, and their two children, Kyle and Cayden — were reportedly enthusiastic new members of the block party planning committee, though many neighbors noted they were particularly interested in the inclusion of a giant inflatable bouncy castle.

“Yeah, they pitched renting a bouncy castle for the kids before we’d even discussed the date,” said Veronica Jansen, 43, a teacher. “Brian started chanting ‘boun-cy-ca-stle, boun-cy-ca-stle.’ I thought Lydia would stop him, but she joined in immediately! It took us almost ten minutes to get them to stop!”

After the dissolution of this year’s plans, the neighbors of the Kirkmans thought the festivities were on-hold, but soon realized the family had carried on with the plans on their own.

“Last Tuesday Brian [Kirkman] was knocking on my door, handing me a reminder to move my car on Saturday morning,” said Glen Levi, 48, a construction supervisor. “I told Brian I thought we’d canceled the block party and he immediately got really defensive, saying stuff like ‘nononono, that was a mistake,’ and ‘George Lopez told me it was back on so I already bought the bouncy castle,’ and ‘our neighbor George, not the comedian.’ I asked him if he meant he’d rented the castle, and he just said ‘it’s an investment,’ and walked away.”

“He told me it was Glen who decided the block party was still on,” said Lopez, “and then he implied the famous George Lopez was going to be there ‘to check out the bouncy castle.’”

That Saturday, the neighborhood watched as the Kirkman family blocked off Sunnydale and set up the bouncy castle. Much of the other aspects of a typical Chicago block party, neighbors noticed, were absent.

“Yeah, they just put up that bouncy castle and stood there watching their kids jump around in it for hours,” said Jansen. “Not cheering them on, mind you. Just watching like they were standing in a museum looking at the most beautiful painting they’d ever seen. Didn’t stop till the block party permit ran out.”

“I kinda wanted to take my son out and see if he could join, but I don’t know, sorta felt like it was just for them. Next year we’re probably going to have to get two bouncy castles.”