The Bonehammer Has Been Chosen as This Year's Christmas Train 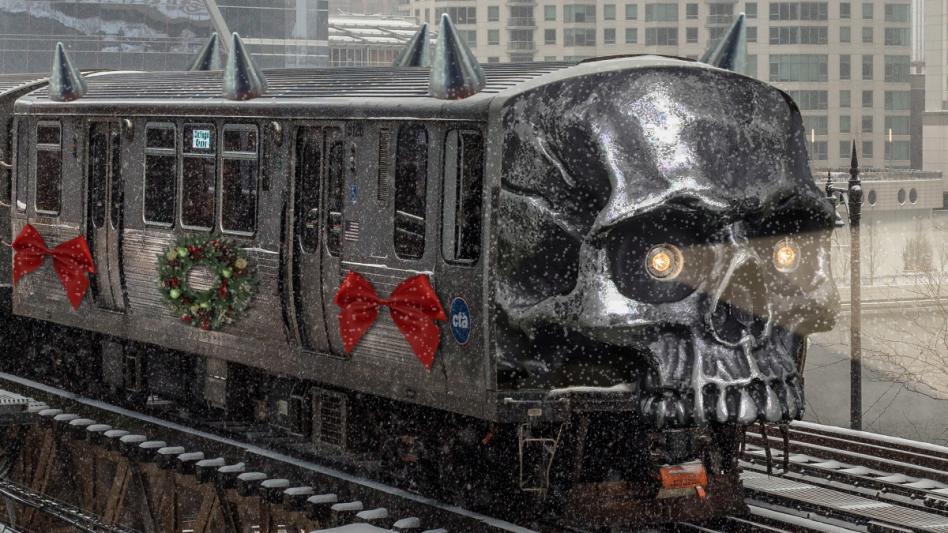 ROGERS PARK — Some lighter fare comes down The Chicago Genius Herald pipeline today as our breaking news desk has just received word that The Bonehammer, one of the city’s oldest public transportation relics, has been chosen as this year’s Christmas Train.

“Fair’s fair—lots were drawn and we pulled 001,” announced Angous MacTiernan, 78, head CTA historian at the annual Christmas Train Deliberation Summit. “That’s Bonehammer’s number, and by the Pact we must oblige it, drape it in tinsel and offer up the bones and blood of our youngest to it in the name of the holiday season.”

“May God forgive us for what we have done,” he added, crossing himself.

Originally slated for decommission after the 1984 “Summer of Slaughter” in which it was responsible for over 200 passenger deaths and more than triple that in non-fatal maimings, The Bonehammer was instead placed on indefinite train furlough after it was discovered that no man-made tools could rip its ancient, spike-studded doors from their hinges, and no fire burned hot enough to melt its bloodstained brass wheels.

“Bonehammer’s been here since before the CTA was just a twinkle in the city’s eye, and I reckon it’ll be here long after my children’s children have been torn to shreds under its wheels during ‘The Final Commute’,” mused MacTiernan when Chicago Genius Herald caught up with him outside the Howard Station train yard where The Bonehammer currently resides, still wrapped in the warded chains then-mayor Harold Washington placed on it 36 years ago.

But will Chicagoans accept The Bonehammer as the Christmas Train they know and love? Only time will tell, but there’s reason to be hopeful.

“I mean I can’t say I’m thrilled about it,” said Noah Laskowski, 48, who lost his hand as a child when he couldn’t get it clear of The Bonehammer’s doors in time. “But at the same time 36 years is an awful long time, so who knows? Maybe it’s learned its lesson by now.”

“Plus,” he added. “I gotta get to work some way or another, and if that means riding on The Bonehammer during the holiday season, I suppose I don’t have much of a choice in the matter anyway.”

As of presstime, a number of weeping CTA employees were reportedly draping The Bonehammer in tinsel, ornaments and festive lights while MacTiernan called a local talent agency to send down another Santa Claus impersonator, impressing over the phone it was very important he stay far away from the howling, tooth-filled maw The Bonehammer has instead of an operator’s booth “unless he wanted to end up like the last guy.”