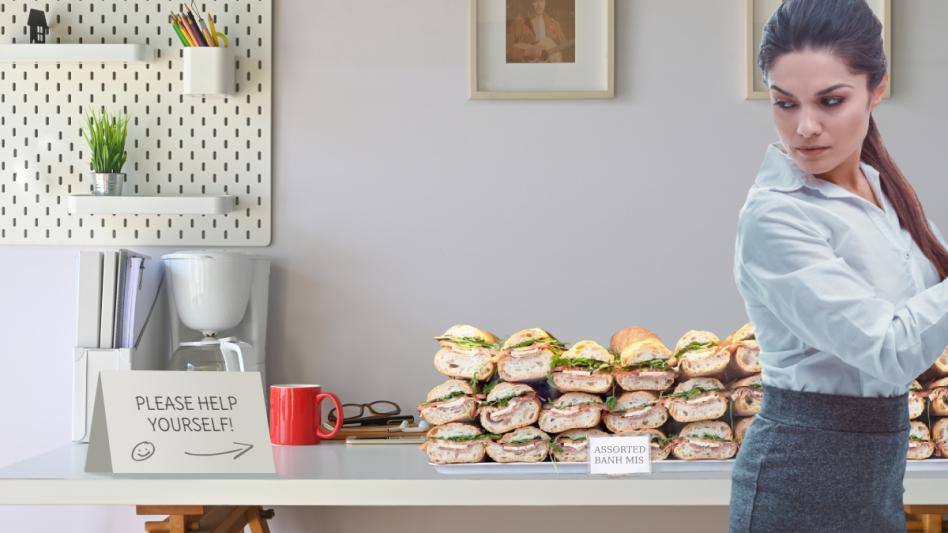 THE LOOP — As coronavirus restrictions relax and workers gradually return to offices in Chicago’s Loop, some generous employers have begun to cater lunches for their employees again. Many employees count themselves lucky to score a free lunch; however, an anonymous tip to the Chicago Genius Herald has suggested that a recent catered meal at a Chicago-based company was maybe a little too nice, raising suspicion that significant bad news is on the horizon.

According to the tip, the suspicious repast was delivered to the offices of software company Griftly at approximately 12:36 p.m. Tuesday afternoon. Our tipster emphasized that the lunch — a variety of banh mi sandwiches, cookies, and cold brew — was far above the usual quality of catered fare at the office, which “usually just orders a bunch of pizzas.” Our tipster alleges that “they’ve never ordered something this good for us,” and “they only treat us this good when they’re about to really lay a big ol’ stinker of a meeting on us.”

After conducting our own investigation, the Genius Herald has unfortunately confirmed the experience of the Griftly staff: over the last several years, office managers at Griftly have only spent about one dollar per employee when catering lunch on average, except for two specific prior occasions, both before periods of major corporate downsizing.

In addition, industry experts we surveyed regarding this event unanimously agreed that a nice work lunch always had a “very bad vibe“ to it inversely proportional to the quality of the lunch. Michael Excelformula, 51, an economist with the Workplace Culture Institute, even suggested that the addition of cold brew coffee to the catered menu is “particularly alarming,” and may precede “a large-scale buyout, or even a forthcoming embezzlement scandal.”

The Genius Herald was not able to discern what dire circumstances the Griftly staff had in store for them, although workers at the office were quick to speculate. “The last time they did arepas I was furloughed,” said Andrea Campari, 34, a graphic designer, filling out a job application on her work computer. “So I guarantee the axe is falling somewhere.”

Representatives for Griftly management did not wish to comment on the tip, although at press time a patisserie down the street was quickly packaging a bulk order of macarons.