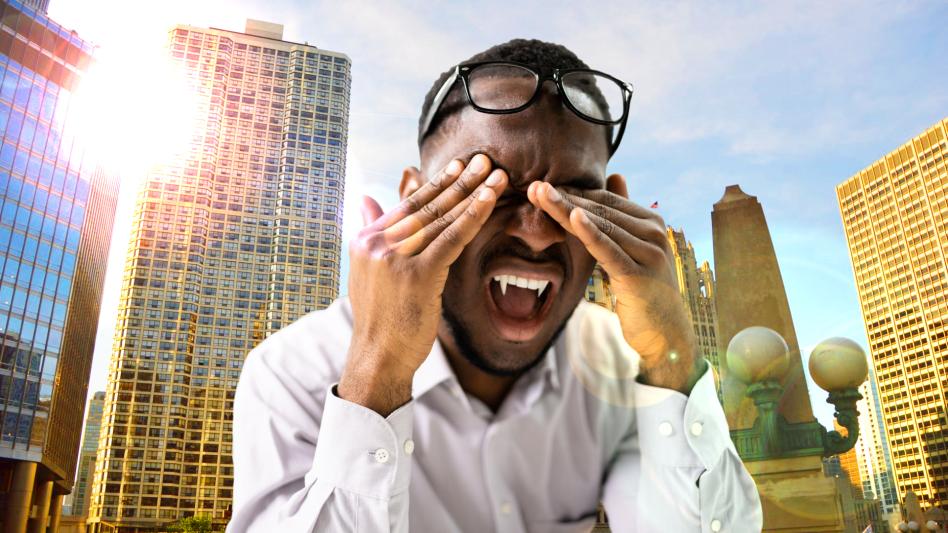 RIVER NORTH — As winter weather across the country starts to abate, Chicago residents are struggling as usual to acclimate themselves to the rising temperatures and pleasant conditions outside. This week, the Chicago Genius Herald received hundreds of news tips from our Chicago readers describing strangers, neighbors, and  family members reacting to the newly sunny skies with animalistic rage and fear; this yearly phenomenon is expected to last until the Chicagoans molt their heavy winter coat in late March.

Many of these sightings have understandably left locals deeply shaken. In Bridgeport, one of our tippers, Di Champaign, 61, reported that she saw an entire family of four alternately gnaw on the exterior of their station wagon and howl in terror, shying away from any attempts to calm them. “The Trevors had always been so normal,” Cunningham reported, “So it was pretty shocking to see them entirely ruin the nice leatherette inside that car by shitting and pissing in agony.”

Although these events have indeed been alarming, the scientific community is urging calm. Pete Vanhelsing, 42, a biologist with the Peggy Notebaert Nature Museum, told the Genius Herald Tuesday morning that while the sight of loved ones snarling and spitting at the sky while their skin boils is certainly alarming, both you and the affected individuals are generally safe from harm. “It’s entirely normal to worry when Don from down the block is ululating and unsheathing lengthy black claws to tear at the siding of his building in a blind fury,” Vanhelsing said, “but this initial phase usually calms down within a few days, and these folks seem to want to avoid other people.”

Vanhelsing and his colleagues further informed us that Chicagoans are uniquely predisposed to this condition around this time of year, having entombed themselves during the winter. “For many folks, it’s just too much to see the sunlight, smell the wild garlic sprouting, or finally think about dealing with that dangerously sharp wooden fence post that broke with the ice in January,” Vanhelsing told us. “We don’t know how to explain it except for some kind of seasonal depression,” Vanhelsing continued. “We’re quite sure they’re harmless, though,” he added, before ushering us out of the museum holding a crossbow.

To confirm this scientific advice, the Genius Herald tracked down one of these unfortunate creatures Tuesday afternoon at his home in the luxurious Transylvania Towers apartment building in River North. Dr. Jim Garmin, 277, a hematologist at Rush Hospital, was one of the few unexpectedly laid low by the change in weather. “I can tell you dis much: it stings like hell,” Garmin told us of his experience, wearing a high-collared cape, wide-brimmed hat, and sunglasses. “I haff suffered greatly in dis vay for — ah, a very long time, and it still sneaks up on you every year. I vas just gettingk so cozy in de darkness, and now de freakingk sunbeams are back again.” Garmin described the symptoms of exposure to this “spring badness” as “excruciating,” “unfair,” and “none of your damnèd business,” before flourishing his cape and slamming the door in this reporter’s face.

As the spring starts in earnest, the Genius Herald reminds you to take care of your suffering loved ones: allow them plenty of space, remove prominent reflective surfaces from within your home, and as always donate to your local blood bank if you can.