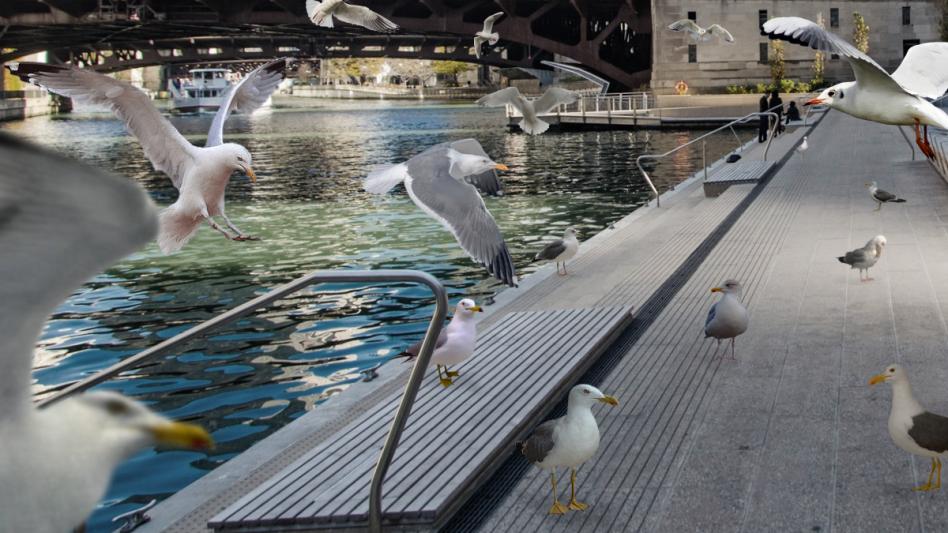 THE LOOP — Exciting news for Chicagoans looking to get out and about this summer as pandemic restrictions lift and vaccines are distributed: city officials have declared Chicago’s famous Riverwalk landmark reopened after the city has driven away the last of the seagulls who took over the Chicago River area. The famous stretch of recently renovated walkways, restaurants and water activities along the formerly fetid Chicago River was taken over by a flock of seagulls estimated in the thousands last April.

“We’re just so proud that the combined efforts of so many hard working city departments were finally able to drive the terrifying seagull army out of the Riverwalk,” said Mayor Lori Lightfoot in a press conference to announce the reopening on Friday. “Without the coordination of the Park District, Animal Care and Control, the Fire Department, Police Department, Port Authority and those brave volunteers from the Chicago Audubon Society — may they rest in peace — this never would have been possible.”

The seagulls, which had taken control of the Riverwalk during the spring 2020 shutdown, were considered “unbreachable” by US Army Corp of Engineers in January of this year. The Army advised Chicago to “forget about the Riverwalk and have it bombed by drones,” but city officials were determined to regain control of the once popular tourist attraction.

“Haven’t the people of Chicago suffered enough?” said 42nd Ward Alderman Brendan Reilly in an impassioned speech to rallied city workers prepared to spearhead an assault on the seagulls’ main encampment around the floating flower beds under the Dearborn Street Bridge, “Don’t they deserve a chance to take a first date to City Winery and pay $14 for a single glass of wine? This Riverwalk is our little slice of Venice! Where we come to bask in the sort-of-dog-like smell of the river and impress our dates with how much wine we can drink!”

The coordinated strike on the seagull-occupied Riverwalk started early Thursday, once the Audubon Society volunteers returned from infiltrating the seagull ranks disguised as a convoy of canadian geese. The only Audubon volunteer who returned alive was able to identify the seagulls’ only weakness before succumbing to his injuries.

“Once those poor, brave bird-enthusiasts identified the presence of the ‘alpha seagull’ in the flock, we knew we only needed to capture and relocate this bird to permanently disband the flock,” said Derrick Wickle, 34, a park ranger who sustained several pecking-related injuries during the brief scrimish, “we all took to calling him ‘Admiral Razorbeak.’ I think we can all agree that’s a cool name for an evil seabird of really any variety.”

After an initial attack with fire hoses and brooms, city officials were able to break the seagulls’ defenses and push them back toward the lake in a battle that many have dubbed “The Battle for Island Party Hut.”

“By time Admiral Razorbeak had fallen, we were consumed by bloodlust,” said Wickle, his voice wavering, his gaze off toward the middle distance, “we wanted to drive those feathered bastards into the lake. We forgot they could fly though, so it was sort of a letdown. But by God...we beat them back. Doubt I’ll ever forget the sight of thousands of seagulls in retreat...twas beautiful.”

To reward their efforts, workers and volunteers have been offered one free kayak tour, or their choice of appetizer at the recently renamed “Audubon Society Remembrance Party Hut.” Welcome back, Riverwalk!