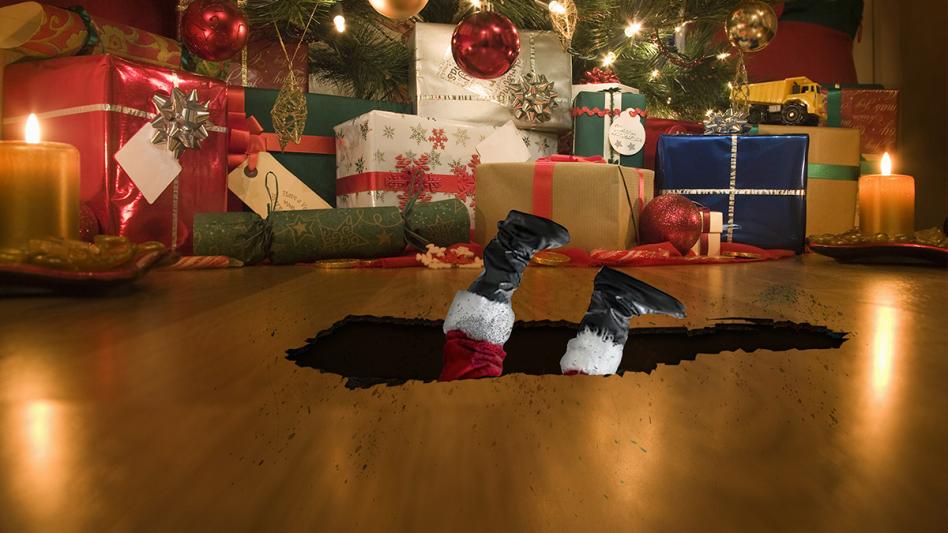 NORTH CENTER — Adding confusion and expense to an already trying year, thousands of apartment-dwelling Chicagoans are grappling with the costly aftermath of Santa eating through their floorboards on Christmas Eve night due to their buildings lacking chimneys.

“We’ve lived here for four years,” said Alan Pickard, 32, who shares a second floor one-bedroom with his girlfriend Angela Lopez, 33. “But we always go to her parents’ house in the suburbs for the holidays. We knew staying in the city by ourselves for Christmas would feel a little different, but we definitely weren’t expecting this.” The couple, who celebrated Christmas Eve with several turbulent family Zoom calls and a movie, went to bed early, only to be awakened at three in the morning by loud chewing and grinding sounds emanating from their living room. “It was wild,” Pickard continued, shuddering. “I was in my kerchief and Angela was in her cap, and then from the futon area there arose such a clatter! We got in there, and who do we find but Chris Kringle, chewing on a baseboard.”

Other Chicagoans cited similar scenes of fear and shock after receiving an unexpected guest in their homes the night of the 24th. But to Santa, the element of surprise was just part of the fun. “I love every part of it,” he said, eyes twinkling as he prepared for the month-long hibernation following his Christmas feed. “When people stumble in and see how messed up their floor is, and then they see me there, in the corner with my jaw still unhinged — it’s a riot. And then I leave them a camcorder with a bow on it or whatever and move on to the next place.”
For most, the expensive floor repairs were worth the visit from Saint Nicholas. “He brought me a pomegranate this year, and the tunnel he left showed us that our building has a big dry rot problem,” said Pickard, shrugging. “So I guess he did us a favor. Still kind of a toss-up, though.”

Local Target employee Sandra Abbott, 42, was unphased by the Claus-induced wreckage. “This happens every year,” she announced, shaking her head good-naturedly while taping cardboard over the messy hole in her kitchen floor. “I leave some milk out for him so he can rinse the splinters out of his teeth before moving on to the next apartment. Some folks aren’t used to it, but it’s nice to have the company.”