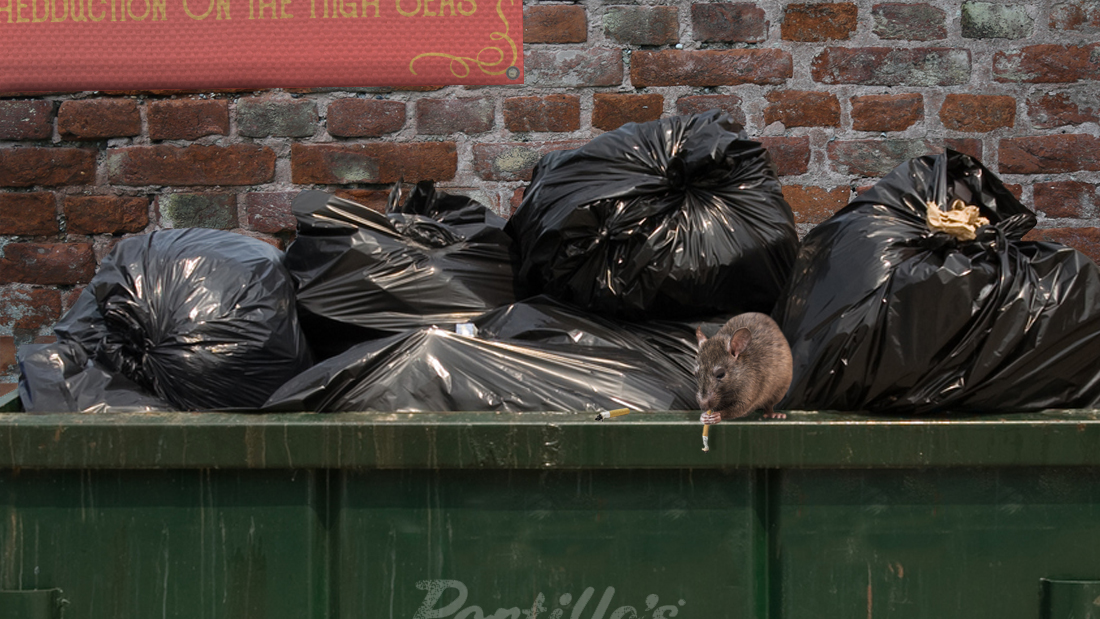 RIVER NORTH — It’s Rat Week here at The Chicago Genius Herald, and to celebrate one of our city’s greatest treasures, we’re shining a spotlight on Sharon, who, at an astounding 7 years old, is thought to be the city’s oldest living rat.

Sharon lives in the alley behind Portillo’s Hot Dogs in River North, where she has resided since around 2015. Chicago Genius reporters caught up with Sharon earlier this week, on the eve of her seventh birthday.

“A lot of folks ask me what my secret is, what I’ve done to live this long,” said Sharon. “Well, I can tell you that, although I’ve had dozens of children with my first partner Ray (flattened by a South Loop garbage truck in 2017), and possibly hundreds of grandchildren, one of the biggest secrets to my health and happiness has been avoiding men. Like take Ron, the Portillo’s manager...he’s always running out here, shooing me away from the dumpster with a broom. We’ve got a whole ‘will they, won’t they’ thing going on, but I’m not afraid to start hissing and baring my teeth if things get a little too fresh! I’m a strong woman but I’ve also got my honor, you know?”

“So yeah, I’ve dated around here and there”, Sharon continued, “but over the years, I just got burned by too many players...a lot of ego and frankly, a lot of men that just didn’t respect me as a rat. Just like my favorite song says, everybody plays the fool sometimes—and that really is true.”

Sharon also shared a bit about her daily routine, which she says keeps her vitality high and her stress low. “Every morning, I start my day with a slice of bacon from the Portillo’s dumpster. I really enjoy that, it puts me in a great mood. Now, at the end of the day, I always treat myself to one or two cigarette butts. Everything in moderation, that’s the key.”

Sharon says that although she’s slowed down a bit in recent years, she still gets in a little daily exercise walking from the Portillo’s dumpster down to the other end of the alley where the street runoff pools up.  She’s hoping to continue her daily walk for as long as she possibly can.

Reflecting back on her unusually long life, Sharon said if she had one piece of advice for others, it would be this: “Just try to enjoy the simple things in life. Don’t be afraid to treat yourself a little every day, and most of all, just take life as it comes—one dumpster at a time.”