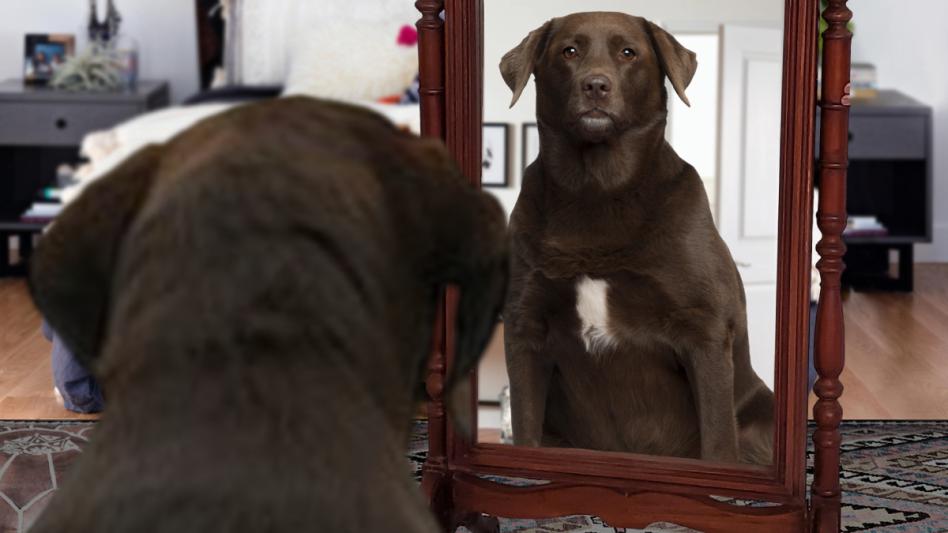 LAKE VIEW — As summer approaches, Chicagaons are starting to look in the mirror and wonder what they’ve done to themselves ahead of Chicago’s roughly 2-3 week long beach season. Buster, 5, a Labrador mix owned by Peter Goodberry, 34, a CPA, has been feeling the pressure to perfect his canine form for his return to Montrose Dog Beach, and is starting to worry it’s too late to shed the extra pounds.

“It’s frustrating, to be honest.” said Buster, considering his reflection in Goodberry’s floor-length mirror, “I felt like Peter and I were walking way more during the pandemic, but I guess I didn’t consider that he was feeding me way more. Fuck! I’m just so cute, it’s pretty hard for me not to get a treat, you know? Now I look like a fucking hair-covered blimp!”

Buster, who’s been a frequenter of Montrose Dog Beach since he was a puppy, reports that the stretch of beach where dogs can be off leash is a competitive, often exclusionary center of dog fashion.

“You gotta look good when you hit the MDB,” said Buster, “lots of eyes and noses on you. You don’t want to slip or you’ll be shunned all summer. I knew this Maltese that showed up with an absolutely ragged new hair cut and everyone barked at him. Stuff like ‘take your mop-lookin’ ass back to the park’ and ‘what car hit you to give you that haircut.’ They are brutal.”

To shed the extra weight, Buster has committed to exercise as a last-ditch attempt to get the “sculpted haunches” and “beefy maw” that he claims will be all the rage on Montrose Dog Beach this year.

“Let’s face it, I’m not giving up treats,” said Buster, pacing around Goodberry’s coffee table, “Peter just bought a package of deli ham and you know I’m not missing out on some ham slices. I’m focusing on turning all this mass and food energy into muscle fast. That means when we go walking I’m going to be really trying to run away when Peter lets his guard down so I can get some sprinting in, I’m going pulling hard on my leash for resistance training, and I’m going to be trying to eat any trash I see in case I accidentally come across some diet pills or steroids on the ground.”

Despite all his efforts, Buster has accepted that it might be too late to get into “Westminster Kennel Club Sporting Group” shape.

“Best case scenario is I at least get to into ‘family dog bod’ territory,” said Buster, pausing to chew one of Goodberry’s shoes for “jawline exercise,” “some dogs think Air Bud is a lot hotter in Air Buddies, if you know what I mean. I just don’t want to be out on the beach, splashing around and have Peter snap my pic and post it online with some shit like ‘look at my chonky boi.’ If he does that, consider him no longer my best friend.”

“Ugh, what am I saying,” Buster continued, “I’d forgive him pretty much immediately.”