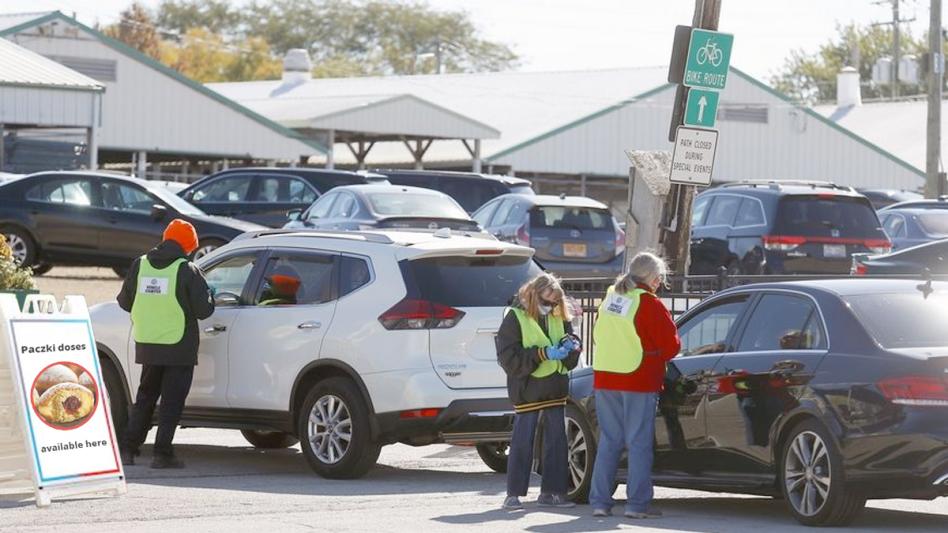 WHEATON — While the entire United States wrestles with distributing the COVID vaccine, the threat of Fat Tuesday has created another immediate crisis for the Illinois Department of Public Health: making sure the Chicago area has sufficient access to paczki. In response, DuPage County has converted its county fairgrounds in Wheaton, IL to a mass paczki distribution center, which will address demand in most of the west suburbs over the coming days.

In a press conference at the center’s opening Tuesday, IDPH director Ngozi Ezike told assembled reporters that while the center will eventually offer paczki to all of DuPage County’s residents, “priority will still be given to to those who qualify for Stage 1A and 1B distribution — Illinoisans with Polish ancestry, bakery workers, and residents of long-term care facilities unable to access paczki operations closer to downtown Chicago.”

The center will open with a fresh supply of Roeser’s paczki, although Ezike did not rule out the possibility of administering the Dinkel’s and Andy’s Deli varieties, once supplies become available. “All varieties, as you know, have undergone thorough testing at a state and national level,” assured Ezike, brushing powdered sugar from her lapel. “Regardless of which paczki you’ll receive here, know that we have the highest standards for testing, storage, and administration.”

When The Chicago Genius Herald interviewed medical staff at the fairgrounds, they were relieved that their work could finally relieve paczki pressure in DuPage County. “It’s heartening progress, really. We have 14 or 15 distribution sites open now for Illinois, and it’s just so good to help them get what they need to survive and thrive,” said Daria Wasilczuk, 33, a nurse working at the facility. “Specifically, a little fried treat from the old country.”

While distribution only begins today at the fairgrounds center, IDPH chief of staff Justin DeWitt told The Genius Herald after the press conference that the IDPH was already working on plans to distribute second rounds of paczki at the DuPage site on Pulaski Day, March 1st. “This facility is crucial to our long-term plan for keeping Illinois supplied with doughnuts,” DeWitt said. “And you and I both know that need extends beyond Paczki Day.”