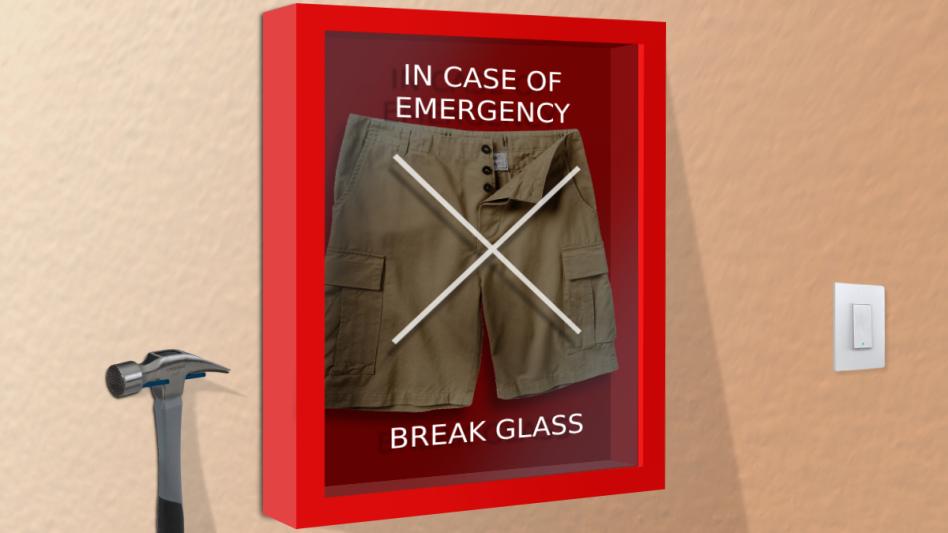 LAKEVIEW — With the Chicagoland area experiencing unseasonably high temperatures over the weekend, many were surprised by the sudden reprieve from the single-digit highs of the past several weeks. Chicago’s Shorts-Wearing community, however, was quick to act to experience the almost-spring-like-but-still-kind-of-nippy weather. When he saw the temperature on his phone, Ben Sanderson, 28, a web developer for a company who’s app processes third-party microtransactions for apps that make animal filters for Zoom calls, quickly rushed to his emergency cargo shorts, smashing the glass panel on the box with a nearby hammer.

“I’ve always been a shorts guy,” said Sanderson, who allowed The Chicago Genius Herald to interview him while he walked to a local 7-Eleven to buy grocery staples at an incredible markup. “I’ve always been known for wearing shorts: rain, shine or dress code. Anyone can be a shorts guy in the Summer, that’s real amateur shorts-guy stuff. Anytime you get a chance to wear shorts in the Winter, you got to jump at it. That’s why I keep these real classic six-pocket, button-flap, khaki Old Navy’s where I can grab them the moment the temperature hits forty.”

Shorts guys, who reportedly live across the Chicagoland area and even other places where shorts can’t be comfortably worn by average people year round, have been spotted with increased frequency across the city, with large numbers seen gathering around parks and on the lake shore. Residents of these areas have reported seeing shorts-wearers “really stretching their legs out” and “pretending to look comfortable despite it being windy and only eighteen degrees above freezing.”

“I’ve just always been more comfortable in shorts,” said Sanderson, gesturing toward his extremely pale legs, “and like, I know if I wear shorts outside when it’s zero I could permanently damage my testicles, but when it hits above 40, that’s perfect shorts weather.”

With temperatures set to remain in the high thirties to low fifties over the next week, Sanderson expects more shorts guys to start to emerge.

“A lot of shorts guys just disappear when the winter gets really bad. They retreat into their apartments to sit on their couches and game,” said Sanderson, “but if it really hits fifty-five next Saturday like they said, you’re going to see shorts with functional pockets as far as the eye can see. The mid-fifties are pure ecstasy for shorts guys. March is like our June. I bet they’re digging their shorts out from drawers that are too close to their beds to fully open, or from under massive piles of somewhat dirty laundry, or maybe even ordering a crisp new pair online and not giving one shit how they fit.”

With that Sanderson strolled off with his $6 carton of eggs, $5 orange juice, and two Monster energy drinks, complaining the walk was “making him a little sweaty.”