Not Again: Clumsy Cows to Blame for Jack-O’-Lantern Vandalism in Chicago Area 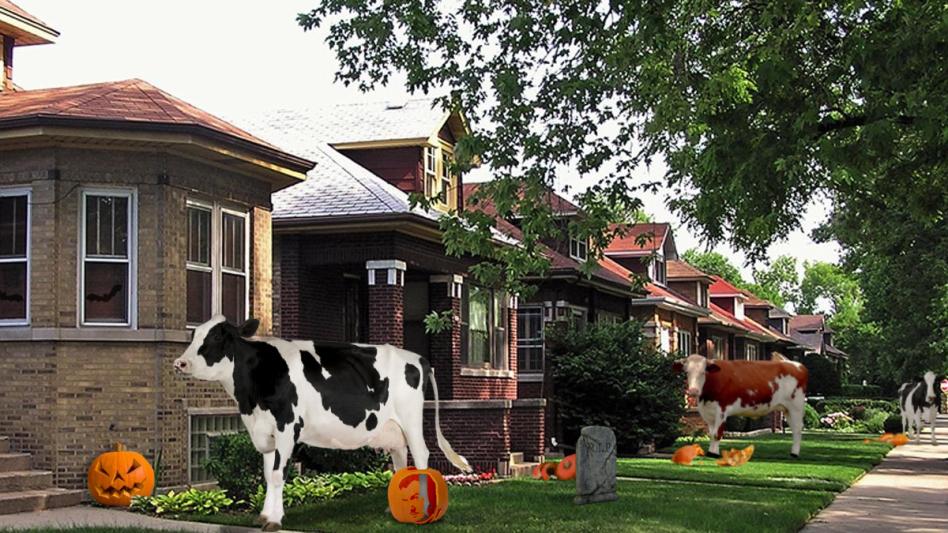 BRIDGEPORT— Just when Chicago thought it was free of its bovine menace, the careless cattle have struck again. During the Great Chicago Fire, we were able to weather the fatal clumsiness of Mrs’ O’Leary’s cow, but the cows are back, and they’ve aimed their back hooves at the city’s jack-o’-lanterns.

Chicago will never forget the first time cows ruined things for us: It’s been almost 150 years since that fateful night in early October. Apparently, however, the cows haven’t forgotten either: Over the weekend, Chicago’s neighborhoods reported nearly $200 in widespread pumpkin vandalism, thanks to roving packs of cows based at the city’s urban farms. Even for the most hardened Chicagoan, this hits a nerve.

To Judy Sawaya, 70, longtime Bridgeport resident and glowing gourd enthusiast, this spate of lantern attacks has made them more than a little O’Leery. “My grandkids and I have such a good time carving every year, and to have it all crushed because some cows need to get their kicks? It’s so disrespectful.” This year, Sawaya and her family carved four pumpkins, each with their favorite classic horror villain. All four now sit by their dumpster, likenesses of Lon Chaney and Vincent Price alike caved in by errant footfalls of the city’s infamously ungainly ungulates. When will Chicago’s lantern lunacy end?

Scenes like this played out all weekend across Chicago, from front porches to grocery store displays, bungalows to high rises. Even Chicago’s busy commercial areas proved vulnerable to this grim reprise of our city’s darkest chapter. Just ask Melvin Hooper, 64, groundskeeper at the Lincoln Park Zoo. He works with animals every day, and he says he’s never seen anything like this: “I was settin’ up the Zoo’s annual display of jack-o’-lanterns for da kids, up by da front gates, when I heard a dang stampede comin’ from behind me. These dang cows got da camels in on it too! I tried to save da display but it was too late — a cloven hoof through every single one.” Set a 3-square-mile fire on us once, shame on you, cows. But destroy our only source of seasonal merriment in 2020? Shame on us. We need to do better.

According to Slagel Family Farms proprietor and cow expert Leslie Slagel, Chicago-area cows have set their sights on our lanterns since day one. “They have such a hankering for being in the city in the fall, they’ll do anything to trick us into letting them go cause mayhem,” Slagel claims. “They’re positively devious...it’s almost a rite of passage for them. Some of them got all the way there from our farm in Fairbury this year.”

Is any lantern safe in Chicago during the month of October? Will we ever find a way to protect our spooky seasonal crafts from these cows’ cloddish cloppers? This reporter certainly hopes so. In the meantime, authorities advise keeping your jack-o’-lanterns indoors if possible, or at least laying down a non-slip surface around any lighting fixtures exposed to the elements, organic or otherwise. And as always, keep a fire extinguisher handy.