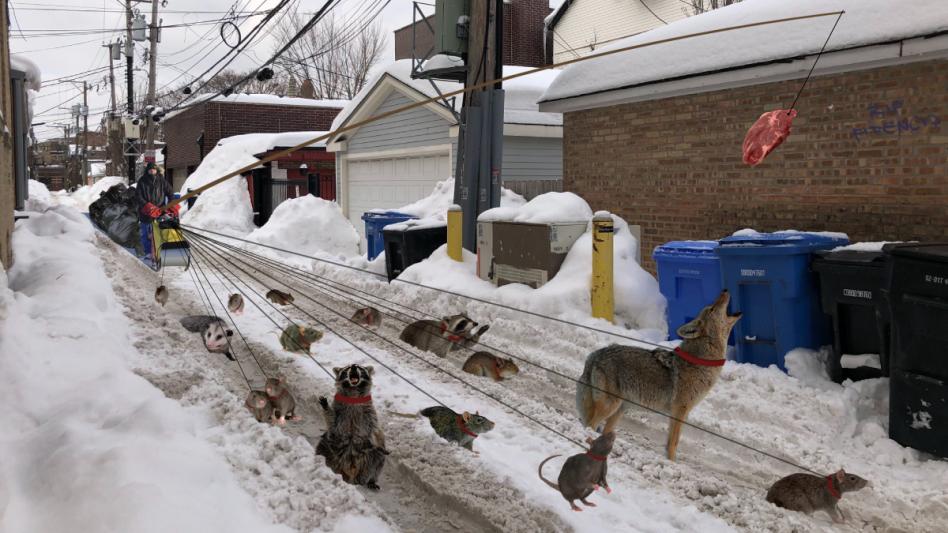 LAKEVIEW — With snow still blocking much of Chicago’s system of wide, easy to urinate in alleyways, trash collectors have reported difficulty getting trucks down the icy, snow-packed alleys. Moving quickly before trash starts to pile up like this is New York City, Chicago Sanitation approved the use of emergency, vermin-driven trash sleds to complete weekly pick ups.

“We haven’t had to break these out in years,” said Ted “Ted” Vorgolla, 53, a trash collector who’s worked for the city since 1992, “it’s pretty much just big dogsled we hook up to whatever accumulation of rats, coyotes and raccoons we can catch. Hardest part is keeping the coyotes from eating the rats, but once they all start to work together, these babies fly!”

Across the city, many Chicagoans woke up not to the beeping and mechanical crunches of their usual trash trucks, but instead the cacophonous sound of hundreds of animals pulling sleds piled with garbage like that one part in How the Grinch Stole Christmas! (1966).

“I looked out my window and it was like seeing the house in Up,” said Rebecca Whitmire, 34, a Lakeview resident, “only if the balloons were a bunch of street animals, and the house was a big pile of frozen trash on a sled, and if the cute old man was a sanitation worker in a snowsuit dangling a hunk of meat on the end of a pole. What I’m saying is it was nice they still picked up our trash, but I think that sight is going to stick with me in my dreams for awhile.”

“I was relieved they still picked up the trash this week,” said a Lakeview resident who requested to stay anonymous, “I had an...incident and ended up spilling a lot of blood on my mattress. I dragged them...it out there the night before pickup and of course the snow started to really pick up. I was so worried it was going to sit out there forever...because I don’t like to be a bad neighbor of course. I saw the trash sled picking it up this morning, and it was such a relief, even though the coyotes almost got it away from them a couple of times.”

With a crack of his bullwhip, Vorgolla ushered the teeming mass of vermin onto the next stop, calling out to the lead racoons “on Trasher, on Rancid, on Stinky, and Dustbin! On Vomit, on Stupid, on Bandit, and Shitzen!” before crashing into a nearby snowbank.