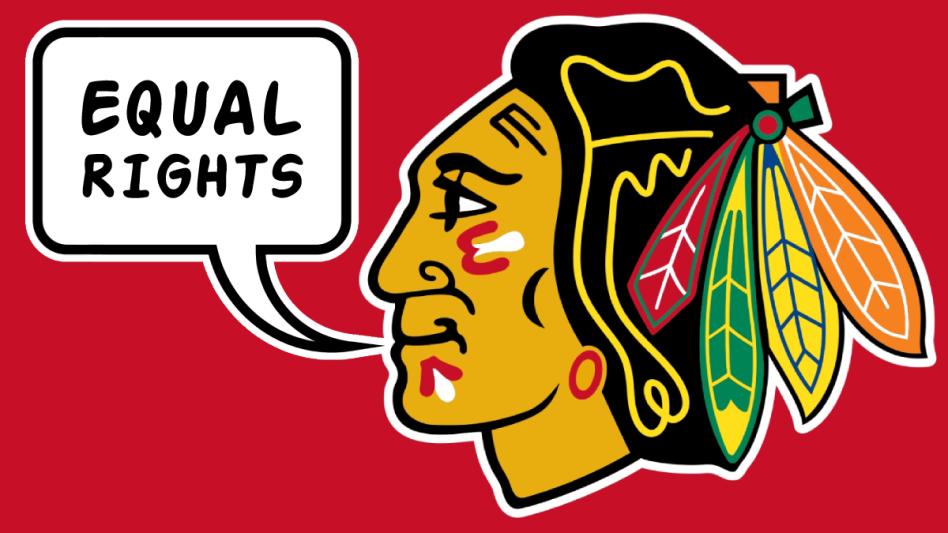 UNITED CENTER — In recent years, many professional sports teams across multiple leagues have drawn criticism for their usage of Native American names and imagery. The Chicago Blackhawks are no exception, as their logo and namesake are both direct references to Native American tribes. However, the beloved hockey team’s owners just made an update that will silence critics once and for all: they fixed the team’s logo by adding a speech bubble that says “Equal Rights.”

The Blackhawks logo, which features the head of Sauk warrior Chief Black Hawk, is arguably one of the most recognizable logos in all of professional sports. While critics claim that using a cartoon version of a respected Native American as a sports logo is culturally insensitive, the ‘Hawks management are positive this new update will clear things up.

“We’d actually been toying with the idea of adding a speech bubble to the logo for a while now,” explained Freddie Blirtz, 40, a spokesperson for the team. “We were originally thinking of having him say something like ‘I love hockey!’ or ‘Sponsored by Al’s Beef.’ But, given the recent criticism, we figured ‘Equal Rights’ would probably be the smarter move to make right now.”

Blirtz went on to clarify that this update is not just a ploy for good publicity. The ‘Hawks really do believe in this message.

“The Chicago Blackhawks firmly believe in equal rights—always have,” said Blirtz. “Right before every game, all of the players circle up in the locker room, put on headdresses, and chant ‘equal rights’ over and over again for a really long time. Sometimes they get so carried away that they forget to go out and play!”

In addition to the logo update, Blirtz revealed that the team’s mascot, Tommy Hawk, will be coming out as bisexual. Now that is commitment to the equality movement!

It is so inspiring to see a team like the Blackhawks use their platform to denounce tokenism and spread positivity. Other sports teams tied to Native American themes, take note!