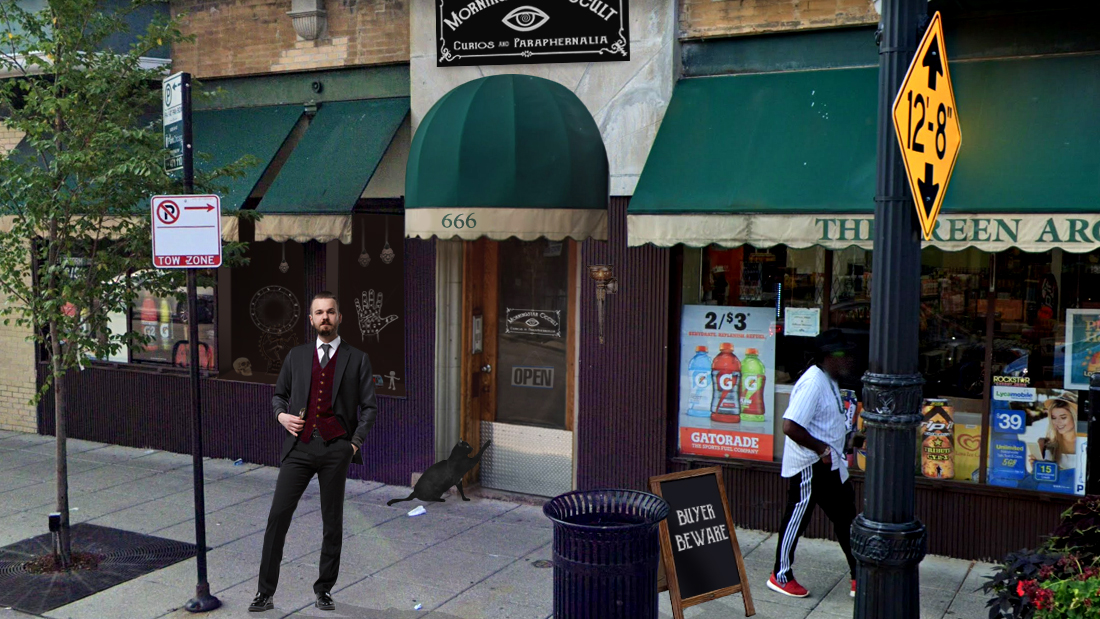 UPTOWN — Stinking of brimstone and with a glint of hellfire barely perceptible in his eyes, local small business owner Louis Cipher has reported that despite strong sales of tarot decks, sales of his cursed artifacts remain disappointingly low.

When asked if he might pivot to selling tarot cards and astrology texts, Cipher let out a consternated sigh and stroked his immaculate jet-black goatee. “Perhaps,” he said in a seductive bass, “but once you’ve sold a pair of barbells to a weak nerd that will make him lift weights so hard his arms explode, going legit just lacks a certain je ne sais quoi, don’t you think?”

Cipher owns “Morningstar Occult Curios and Paraphernalia,” a local landmark situated on Broadway and Bryn Mawr that’s been in operation since 1979. But the store, which promises “SINfully good prices on all your wildest dreams” might not be able to turn a profit this quarter and is in danger of losing its lease as a result.

Uptown residents themselves are divided on how the loss of Morningstar Occult Curios will affect the neighborhood. “I think it’ll be a shame if Louis gets pushed out,” said Ursulina Velasquez, who owns the taqueria across the street from the store. “Lord knows the last thing this neighborhood needs is a high rise or a gastropub. And I say that even though Morningstar sold my uncle a cologne that turned him into a big bug.

“To be honest, I think he’s a menace,” said Alan Grensbourgh, who’s been an Uptown resident since the 80s. “He’s got a chess board that turns whoever loses into a piece on it, a key fob that upgrades your car into a hot rod at the cost of its brakes and pair of shoes that’ll make you fatally good at dancing. And those are just the ones I’ve witnessed firsthand! Honestly, it’s negligent of the city to let him continue to operate a storefront in what’s shaping up to be a very nice neighborhood!”

“And don’t even get me started on the dioramas he puts in the windows,” Grensbourgh added, shuddering. “There isn’t even anything wrong with them—they’re just tacky.”

“The dioramas are...tacky?” said a visibly disappointed Cipher when this information was relayed to him. In the interest of full disclosure, this reporter did notice the diorama appeared to show him (the reporter) getting run over by a bus with werewolf claws instead of wheels, and the bus said “THIS IS GOING TO HAPPEN TO YOU” on the side. He found it, in all honesty, a little tacky.

“I guess I always thought they lent an air of mystery to the place. Well, nevertheless, I suppose I could just start selling black tourmaline crystals and be done with it, unless I could interest you in this kitchen knife? It keeps quite an edge, you just have to be careful who you use it around…”