Unmasked: Turns Out the Humboldt Gator Was Just Old Man Richardson Scaring Teens Away From The Treasure of Humboldt Pond 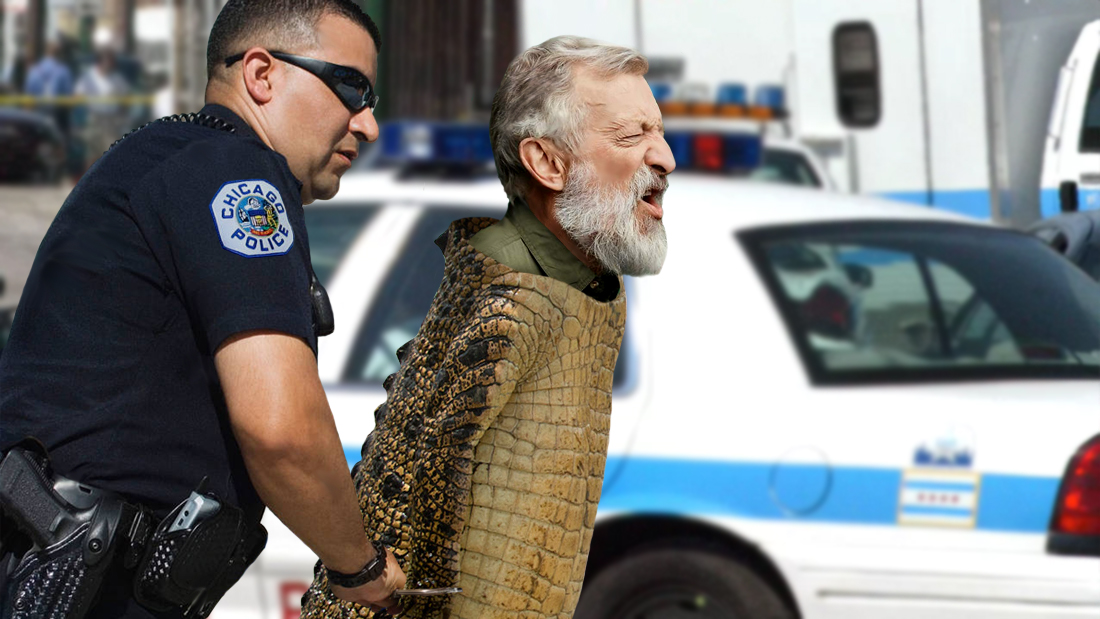 HUMBOLDT PARK — Wriggling under a net dropped by a series of comical fumblings by a group of teens and their dog, the Humboldt Alligator was unmasked today and revealed to be Oscar “Old Man” Richardson, 78. The local curmudgeon was trying to scare teens away from Humboldt Park so he could dredge up the Treasure of Humboldt Pond undisturbed. “I would have gotten away with it too, if everyone wasn’t so got-dang online!” Richardson said as he was dragged away by police, “what is wrong with you people? It was just an alligator in a pond it wasn’t supposed to be in! Just take the fucking hint and stay away from the pond, you teens!”

Ranting about “twitter thing-a-ma-jigs” and “the memes,” Richardson was taken into police custody almost a week after the Humboldt Gator was first spotted, menacingly floating in a lagoon in the park. Carlos Victoria, 32, an early gator-sighter, recalled thinking there was something off about the reptile: “I guess it was weird that the gator called out ‘leave this place, boooo!’ when I saw it, but I’d never heard an alligator, so I thought ‘hey, maybe they talk like ghosts.’”

Despite warnings to stay away from the potentially dangerous wild animal, local teens immediately flocked to the West Side park for a chance to solve “The Mystery of the Gator in the Lagoon.” “As a teen, I can’t resist getting involved when there’s a mystery afoot,” said Sandy Lang, 16, one of the gator’s captors, “we teens can’t help ourselves. Put us in an unsupervised group with a comically large animal companion and we’re going to find a caper, eat giant stacks of food in one bite, and run so fast our legs blur and make a ‘woob woob woob woob’ sound.”

Old Man Richardson, a retired insurance salesman living in the Humboldt Park area, became aware of the Treasure of Humboldt Pond after finding a treasure map at an estate sale that revealed the spot in the park where Abraham Lincoln hid a stockpile of gold. Lincoln, who would later go on to be the President of the United States, went through a brief period as Chicago’s most notorious bank robber. Richardson says he created an alligator costume using some fetish gear he bought at the same estate sale to scare people away from the pond while he searched the bottom for Lincoln’s lost gold.

“I guess I just didn’t realize how hungry folks were for a news story that was whimsical and fun,” said Richardson, “I thought people would hear about a hungry alligator and avoid it, but it turns out they all wanted to gawk at it and make weird social media groups about fucking it and taking it to see the Bean. I would have gotten away with it if it wasn’t for that pesky content cycle!”

Richardson is set to be executed next week.