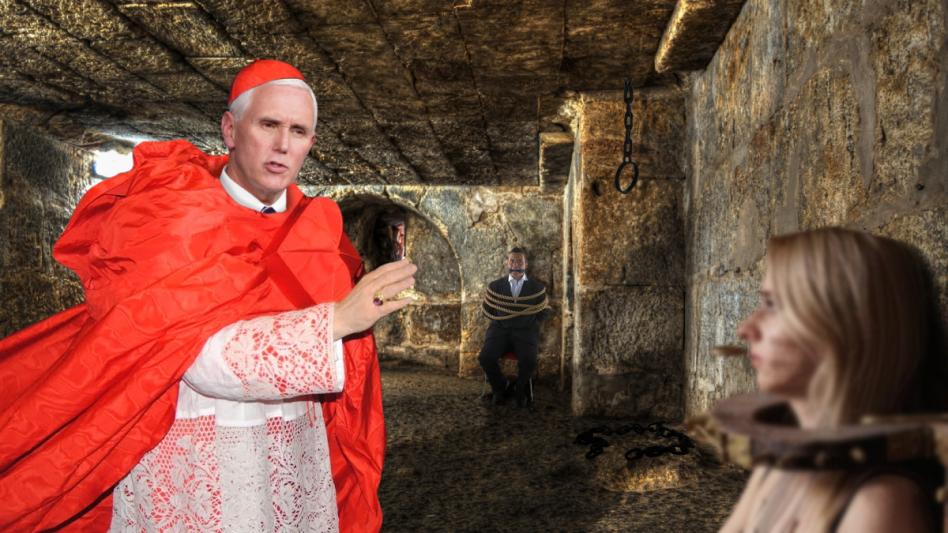 WASHINGTON — After several aides to Vice President Mike Pence—including his chief of staff—tested positive for the coronavirus this week, the Vice President has reportedly leveraged his role as the chief of President Trump’s coronavirus task force to establish a “Holy Inquisition to Root Out The Causes of Pestilence” among his staffers.

In a ceremony officiated by hooded figures in red robes on the Senate floor, Pence announced that his staff would be “purified before God and Man” as he and other authorities investigated the source of the outbreak. Campaign strategist Steven Malcolm, 32, was the unfortunate subject of the auto de fé, during which Pence and the other figures sternly questioned him from an elevated bench as Malcolm’s limbs were slowly stretched on a 16th-century torture device that Pence proudly identified as a porto, a cousin to the “rack.”

“I must remind my staff of our doctrine: Non sitire sanguinem,” Pence intoned as the tribunal began. “Neither I, nor President Trump, nor God, thirsts for your blood. You may end this unfortunate turn of events as soon as you reveal who brought this plague upon the highest offices in the land, and what other depraved sins you have committed to bring this judgment down upon us.” Malcolm’s answers turned from desperate to hysterical as the ceremony dragged on, Pence shaking his head sadly at each further confession. As Malcolm was dragged away from the device, coughing blood, Pence admonished the remaining staff chained below the dais. “My children, these hurts are nothing to the pain you have caused me at your betrayal. May God have mercy upon you.”

The Vice President’s office has confirmed to The Chicago Genius Herald that other proceedings have been conducted among Pence’s staff both in Washington and on the campaign trail. Many of Pence’s staff have been reported missing after these trials, and rumors have also surfaced of large wooden iron-bound crates arriving at the White House from Seville and the Vatican. When asked to confirm these reports at the ceremony, Pence grimly beckoned to another hooded figure, whose voice was clearly that of Supreme Court Justice Amy Coney Barrett. “These devices will help bring the Vice President’s staff back to the moral hygiene that he—and our founders—expect of all of us,” said Justice Barrett. “The wheel, the scarpines, the Judas cradle...these, in his hands, will save them.” Barrett sighed wistfully and glided away to join the other figures quietly conversing behind the bench.

Before the press could leave the event, Secret Service agents barred the exits to the chamber with long bardiches, confiscating many reporters’ cell phones before Pence himself intervened. “Let them spread their heresy, hijos. They will be judged, as will we all.”