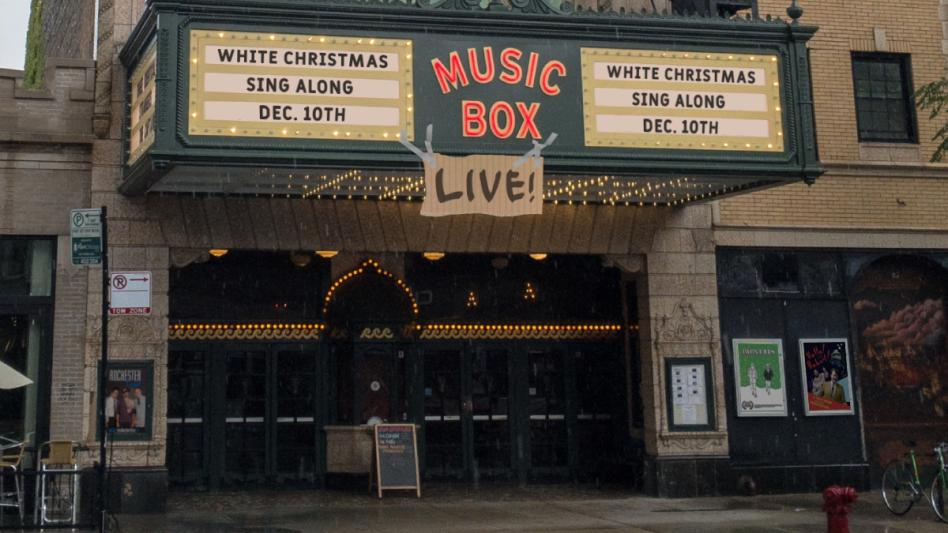 WRIGLEYVILLE — Many Chicagoans treasure holiday memories singing along with their families to the Irving Berlin classic “White Christmas” at the Music Box Theater’s annual showing. However, after an unfortunate archives mishap, this year’s event will differ from those memories in a spectacular fashion. When the theater staff was unable to locate the film for the showing this weekend, staff scrambled to avoid disappointing moviegoers, landing on an unusual solution: current reports indicate that employees are attempting to rehearse and stage the famous musical — live — in the days preceding the planned event.

Sources close to the Music Box claim that concession staff and projectionists alike were at the Music Box late into the night last weekend attempting to replicate the virtuosic tap dances and large ensemble numbers featured in the film. The theater’s organist, Danielle Kaye (no relation), 32, who ordinarily just plays between films on weekends, had even been caught up in the frenzy. “Irving Berlin scored this for a full film orchestra, but I can make it work. Old Brunhild here had a lot of trouble with the lullaby sections,” Kaye said to the Chicago Genius Herald Sunday, gesturing at the organ, “but she’s got ‘Count Your Blessings’ in her yet, I think.”

This holiday havoc is allegedly the result of a recent overhaul of the theater’s digital film archives, overseen by Music Box archivist and weed sommelier Ben “Bong” Crosby (no relation), 40. Crosby claimed to the Genius Herald Wednesday that he was “foggy” on how it happened. “When I copied ‘White Christmas’ over to our new server, I was sure it was there,” Crosby said, pausing to take a hearty pull from his namesake glassware, shaped like a knight astride a massive white horse. “But when I went to pull the file for the showing,” he continued, “all I found was ‘Holiday Inn!’ It was as though the computer confused the two movies, but I don’t see how that’s possible. They’re very different.” Crosby refused to elaborate on this final claim.

Forced into translating “White Christmas” to a new format, the erstwhile thespians at the Music Box have taken the opportunity to make some much-needed updates to the show. “Naturally, we’re cutting a wide berth around the ‘Minstrel Show’ bit,” said Sage Clooney (no relation), 22, a marketing department intern who had been nominated director by virtue of having been to theatre school most recently. “Nothing in film history comes as close to doing blackface without actually doing blackface,” Clooney continued. “While I guess that’s impressive in kind of a horrifying way, most of the audience has either been asleep for 30 minutes by that point or is wine-drunk from the Christkindlmarket.” Viewing a special press preview, this Genius Herald reporter can confirm that the apparent structure of the fictional variety show “Playing Around” remained entirely unhinged despite the missing number.

As rehearsals run low on time, tensions are high among the show’s amateur cast and production team. Several cast members have objected to the behavior of the show’s stars, who have been seen chain-smoking cigarettes and downing whole bottles of liquor in one sitting to “get into character” as famous 1940s entertainers. However, this strategy appears to be working, as all four leads have achieved the half-dazed distant look characteristic of the beloved film. Sister-act performer Judy Haynes, played by prolific Hollywood dancer Vera-Ellen in the film and box office manager Vera Ellen (no relation), 31, in this rendition, is particularly haunting, maintaining a rictus grin as she executes a blazing tap number seemingly “just for fun” at the end of the first act.

Despite nearly being canceled at the last minute, it seems this Chicago Christmas tradition will live on. Thanks to the tenacity and creativity of the Music Box’s staff, we all can still enjoy the dulcet sounds of this holiday classic calling a kid “freckle-faced Haynes the dog-faced boy” over and over again for nearly two hours. Merry Christmas!