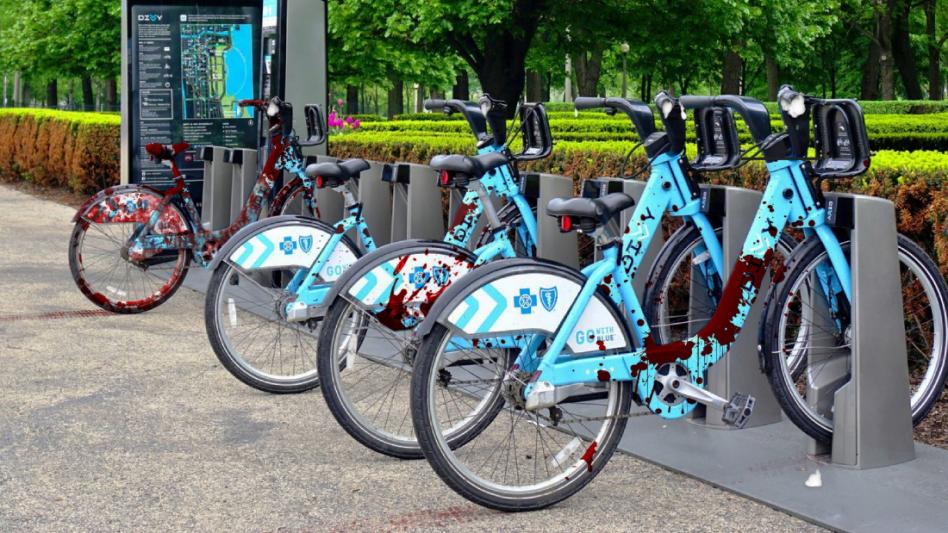 WEST LOOP—The popular shareable Divvy bikes can typically be found attached to the various stations planted on street corners around the city. However, as the bikes have started to experience a significant decrease in regular riders, it’s become clear that they are not handling the neglect well. The streets are emptier, wildlife is busier, and Divvy bikes are officially going full-on feral.

“Our bikes are good bikes, but they do require a lot of attention,” says Brian Bratt, 48, a spokesperson from Divvy. “The stations we’ve built are designed to hold the bikes very securely. But, seeing as this shelter-in-place situation is unprecedented, it’s unclear how the bikes will behave in these extreme conditions.”

The first reported sighting of a bike acting strange occurred last week on the West Side of the city.

“I was just finishing up my normal morning jogging route around the neighborhood, nothing unusual,” says Brittany Frick, 26, a resident of Bucktown. “The next thing I know, there’s this weird bell-ringing sound behind me. I turn around and watch this Divvy bike break itself out of its station, back up, and then charge full-speed toward me. If I hadn’t been right by my apartment at the time, it probably would have run me over.”

While this incident only included one bike, it’s apparently more common for the bikes to travel in packs called “pelotons.”

“The first bike that breaks away from the station, that’s the Alpha Bike,” Bratt explains. “The Alpha will then free the others in that station and form a peloton. From that point on, they’re on the hunt for just one thing: fresh blood.”

Pelotons of various sizes have been spotted in neighborhoods all over the city, including a “Super Peloton” of 70 bikes seen speeding through South Loop just yesterday. Instead of the traditional blue coloration you’d expect to find on Divvy bikes, these feral bikes tend to be covered in blood-red streaks with white foam pouring out of the handlebars.

“Per city guidelines, if you spot a Divvy bike, alone or in a peloton, do not engage,” city officials stated in a press conference earlier this week. “Your best defense will be to bend your body into the shape of an electric scooter, the Divvy bike’s natural enemy, in order to scare it away. But even then, it’s likely already too late.”