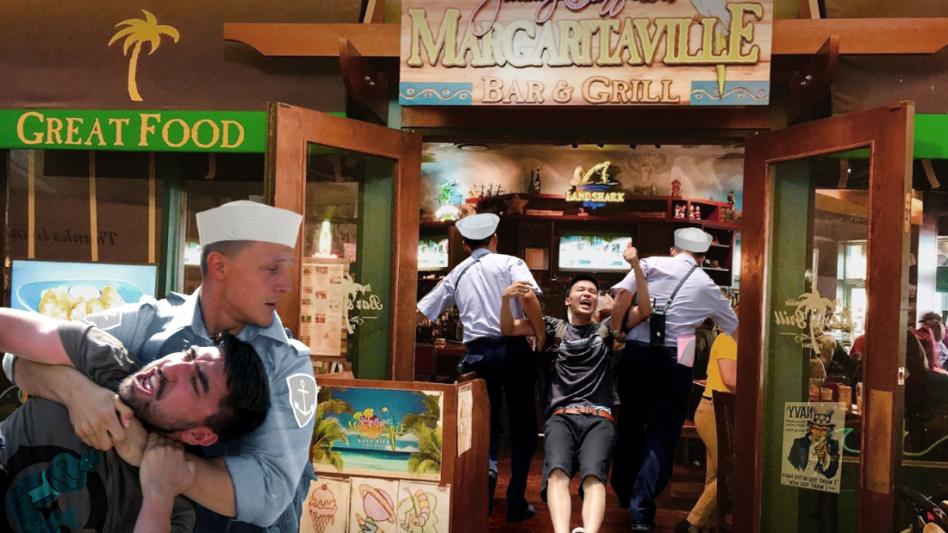 NAVY PIER—Patrons at the Navy Pier location of Jimmy Buffett’s Margaritaville restaurant were surprised to find that the Friday evening “TJIF (Thank Jimmy It’s Friday) BOGO Margarita Party” included conscription in the US Navy. The diners, enjoying Volcano Nachos™ and Double Cheeseburgers in Paradise™, were informed upon finishing their meals of their mandatory service aboard a waiting naval ship outside.

“These people in peacoats just barged in and started handing out these dorky sailor outfits,” said Justin Flinte, 24, of Granger, IN, via Naval Post. “They were all like ‘your margaritas tonight were purchased for you by the Continent’s Congress. By taking the Congress’s margarita you’re indebted to service aboard a Navy vessel for four-score months.’ Total bullshit, if you ask me. But when I complain they just yell at me about the brig, whatever that is. The hardtack sucks. I miss eating at Margaritaville, but this shit would never happen at Bubba Gump.”

A provided statement from Navy Spokeswain Lt. Herman Scipioni, which began with “Argh” extended to be twenty-five letters, explained the sudden, aggressive enlistment of the faux-tropical restaurant. “It be difficult to get landlubbers and layabouts interested in serving aboard one of our frigates or galleons. We assumed a more nautical sort gathered at Mr. Buffett’s bar and grill, and the promise of adventure, treasure, and a free margarita would inspire them to join us out on the Seven Seas. We’re gonna find the Kraken, and register it to vote!”

Jimmy Buffett’s Margaritaville has assured customers that the press-ganging of diners into service was a limited-time promotion at their Navy Pier location, and would not be offered at any location “you can’t park a boat outside of.” “Much like our limited-edition, collectable coconut mugs or Dolphin Nuggets™, this partnership with the US Navy to round up a bunch of drunk mid-westerners and shove them on a ship was just another way Jimmy Buffett’s Margaritaville is committed to giving patrons the ‘Island Experience™.’“

The press release included a statement from sailor-songwriter and restaurateur Jimmy Buffett in the form of a cocktail napkin he drew a boat on.

As of press time the US Army was planning a similar recruitment drive at the next Bears game at Soldier Field.