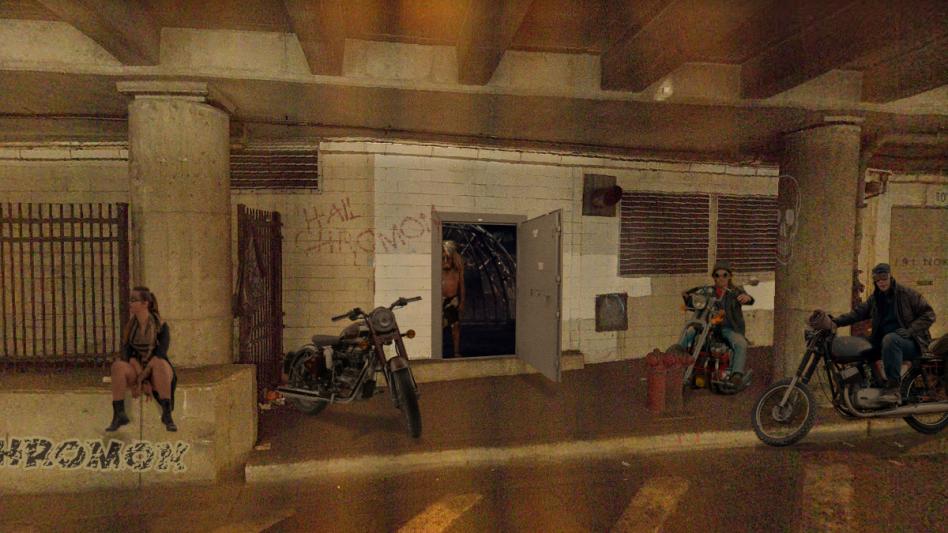 LOWEST WACKER — As residents of Streeterville and the South Loop endured more deafening two-wheeled terror this week thanks to loud motorcycle caravans commandeering the streets in the wee hours, the biker gangs’ noisy antics were unknowingly also raising the ire of another downtown resident deep below. The Road Priest Chromon of Lowest Wacker has issued a rare public declaration, challenging these riders to a Thunderdome for their flagrant disregard of Chromon’s iron rule.

Chromon, a brutal warlord of steel and rubber who has ruled Chicago’s streets from his throne amongst the Piston Pits of Lowest Wacker, seldom makes himself or his army of glorious war boys known to surface dwellers; however, the continued thunderous noise generated by these smaller gangs downtown has challenged Chromon’s primacy as the sole tyrant of Chicago’s tarmac.

The message, which was melted into the asphalt directly in front of the Carbon and Carbide Building at 230 N. Michigan Ave., read “MEALY TWO-WHEELERS / THOU HAST GRIMED THE GAS GOD WITH THY PUTRID PUTTERING / MEET THY DOOM UNDER THUNDERDOME.” Each letter had been painstakingly filled with gasoline, molten metal, or bullets, in the traditional style of Chromon’s court.

A Thunderdome has underpinned the law of Chicago’s streets since Fort Dearborn fell to the flamethrowers of the HegeWitch during the Great Chicago Fire of 1871. Subsequent warlords have continued to add to the Witch’s steel fortress / coliseum and eventually secreted it away in a settlement beneath Lower Wacker, where explosive deathmatches for the rule of Chicago could be held away from the prying eyes of surface “authorities.”

Now finding themselves locked in Chromon’s dread gaze, some members of the motorcycle gangs expressed anxiety when interviewed by the Chicago Genius Herald. “I d-d-don’t know what we were thinking,” said Harvey “2-Stroke” Lewis, 40, a motorcyclist we found staring in horror at the message on Michigan Avenue. “We’re perfectly happy to make everyone’s life a living hell, but not His. Not His! We’ll be fed alive to the Meat Packer for sure...”

Early reports from The Piston Pits indicate that Chromon has indeed relit the engine of The Meat Packer, a monstrous, armored three-wheeled vehicle which infamously runs on a mixture of human blood and gasoline, and which Chromon has not had occasion to ride since his victory over the Organ Grinder beneath the Lyric Opera in 1985. The Wheelkeepers of Navy Pier have also been summoned to officiate, a “sure sign” of a bloodbath to come, according to our sources.

At press time, the war drums have sounded from behind countless service entrances on Lower Wacker, and the devil-train Bonehammer has ground with a screech into Clark and Lake, all as Chromon has foretold. We wish both teams the best!