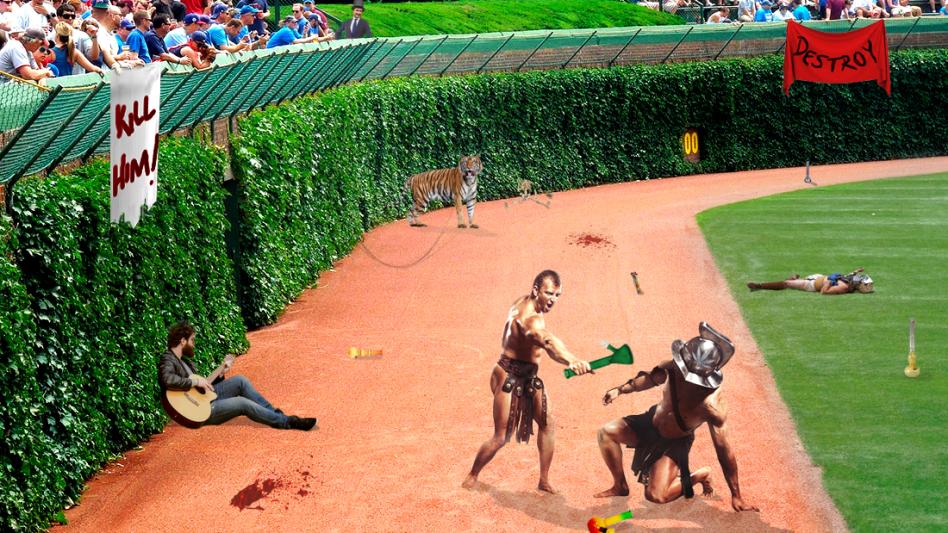 CHICAGO — With less than 60 days remaining until the January 1st inauguration of Illinois’ new marijuana laws, Mayor Lightfoot’s office has announced a new process for distribution of the remaining recreational dispensary licenses in Chicago. City officials plan to administer a public battle of gladiatorial combat amongst all recreational marijuana applicants, beginning this month.

“We understand that there are a large number of Chicago business owners and investors scrambling to apply for a dispensary license prior to the new law taking effect this January”, the mayor said Friday. “Unfortunately, the city is unable to meet the substantial demand for licenses, and that’s why we’re launching the new Gladiator Battle Program. This will give everyone a fair and equitable chance to apply for the limited number of licenses available.”

City officials also announced that Wrigley Field will serve as the battle arena, and tickets will be sold via a partnership with the Cubs ticketing office. Fans are encouraged to arrive early, as the first 5,000 ticket holders will receive exclusive giveaways and memorabilia from each battle.

Gilbert Villegas, Economic Development City Council Chair, explained the new process at a press conference Monday. Donning a brass Roman-style full face helmet with red brush regalia, Villegas laid out the new procedures: “Beginning November 5th, all dispensary applicants should fill out the Arena Entrant form, which provides an opportunity to sign up for a battle slot as well as provide a list of weapons and armor to be used in combat. Any applicant who is physically unable to participate in the combat arena may also use this form to specify a tribute who will fight on his or her behalf. Please note that Aldermen and any officials currently under federal investigation are prohibited from engaging in combat, but may send a tribute in their stead, provided said tribute does not have any pending development interests in their ward.”

Villegas and several staffers concluded the conference by chiseling the official procedures and deadlines into a large marble tablet and were led out by a procession of palm frond bearing magistrates and trumpeting buccinators.

Quite a few hopeful applicants arrived at city hall in the hours after the press conference, aiming to be among the first to chisel their names into the Arena Entrant tablet. Local gaming lounge owner Trevor Stephens was the first in line early Monday Morning. “Having extensively researched the great gladiator training schools of ancient Rome, I almost feel as if I’ve trained at the Lvdvus Magnvs itself! I’m bovnd to the oath of Sacramentvm and prepared to battle for my license in the name of Satvrn, God of Agricvlture!”, he said.

Jeff Warrenton, an aspiring dispensary entrepreneur from Oak Park noted, “I already have a pretty sick collection of siccae, gladius, and fascina that I bought on eBay back when I used to be super into Gloryhammer, so I definitely feel like I have a leg up on the competition. Seriously bro, I even have a venabulum. Totally gonna crush it out there.”

At press time, the city has not announced how many licenses will be distributed through the program, but Mayor Lightfoot stated that victors in the combat arena will be awarded their provisional licenses within 6-8 weeks of defeating their opponent, and the city will also do its best to notify the extended families and return remains (if any) of those who have perished within the same timeframe.