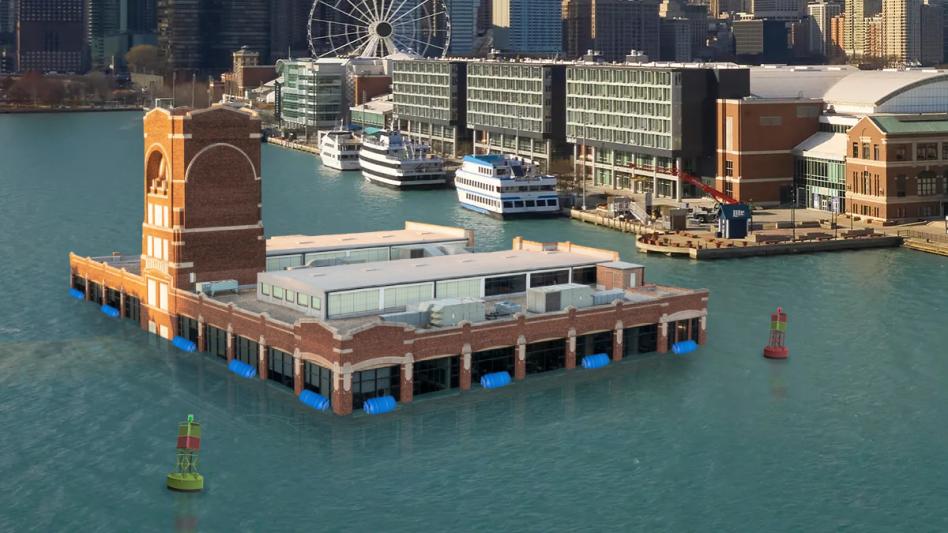 NAVY PIER — Local public radio station WBEZ approved and finalized a merger with The Chicago Sun-Times this week. The merger will create one of the largest nonprofit newsrooms in the nation and change the physical landscape of Chicago media now that WBEZ has moved The Sun-Times from the West Loop to docked outside Navy Pier.

“It was very important to us to truly merge the two institutions,” said Tracy Kempfree, 46, manager of human resources for WBEZ, “and that meant picking The Sun-Times building off its foundation and floating it next to Navy Pier. Currently we’re installing a rope bridge between us.”

Engineers worked on plans to lift the building and move it east to the Chicago River, where it floated out to Lake Michigan to its new home, tied to the pier next to Jimmy Buffett’s Margaritaville Restaurant. The building was moved with some help from special tapings of “Wait, Wait, Don’t Tell Me” in The Sun-Times building where the audience was encouraged to row toward its new home while Peter Sagal banged on a big drum.

“WBEZ has always been a nautical organization,” said Charles Willhamshire-Smith, 54, Vice-Admiral of public relations for WBEZ, “so it was important for us to relocate The Sun-Times to the watery bosom of Lake Michigan. The water is what gives WBEZ its signature flavor.”

“We’re excited to be joining WBEZ in this new venture,” said Dave Osta-Fortuna, 47, a business manager for The Sun-Times, “but we’re definitely going to have to get used to the new commute! Also the little sailor outfits WBEZ wants us to wear. And all the shanty singing. And joining raids on ports up and down the coast. But if that’s the price of bringing nonprofit journalism to forefront of the Chicago market, I say ‘aye-aye, captain!’”