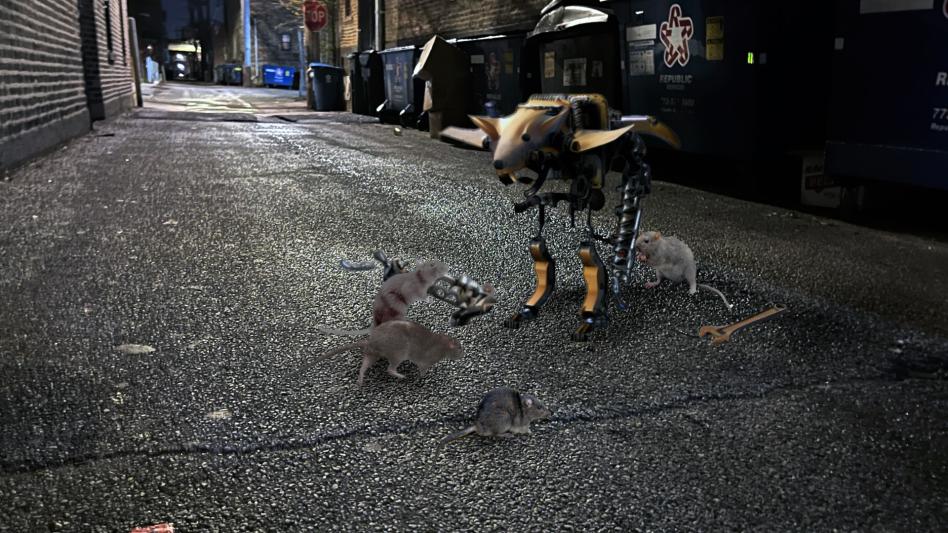 Bridgeport — In an alley near the intersection of S Halsted and W 35th street, several residents reported over the weekend that they saw a sizable assortment of rats putting together some sort of mechanical contraption, which they mostly agreed was not a great sign.

“It’s not uncommon to see a bunch of rats scurrying around when I bring out the trash late at night,” said Paul Richards, 45, “but this is the first time I’ve seen them coordinating on something together, aside from the time they ate that raccoon.”

The Chicago Department of Streets and Sanitation warned that this was the consequence of not properly securing garbage in containers.

“There’s a reason we put up the ‘Target: Rats’ posters,” said Tina Rodriguez, 56, Special Agent of the DSS. “Without having to worry about a food source, rats will quickly discover tool usage.”

Unverified pictures from the scene show what can only be described as a nearly-completed rat-themed mechanoid of unknown function.

“And anyone can throw together a pretty decent mech suit from discarded tvs and old batteries,” said Rodriquez.

Still, some members of the public feel some affection for the furry citizens of Chicago and hold them up as possible protectors of our city and alley system.

At press time, several CPD officers sent to investigate could be seen running from the alley and getting struck with purple particle beams, disintegrating them immediately.