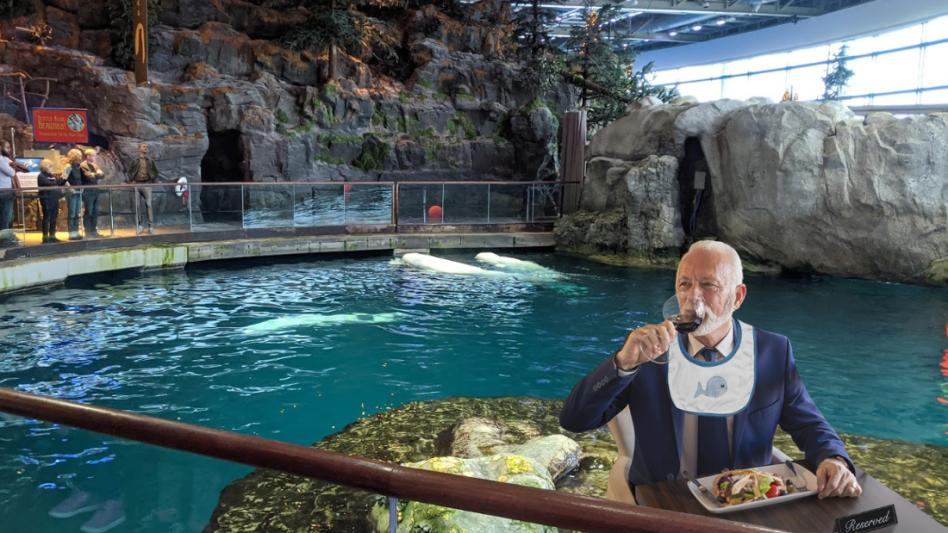 SHEDD AQUARIUM—Taking patrons on a dazzling adventure of the heart and mind, the Shedd Aquarium is drawing headlines with its controversial new beluga whale programming. The “Meet the Belugas” activity has been offered for several years, with visitors paying several hundreds of dollars to interact with the whales one on one, bonding and posing for hi-def pictures. However, recent budget cuts have prompted the Shedd to tack on a separate, optional activity to the popular beluga interactions. If patrons meet the belugas and are unsatisfied with their squeaks, tricks, and general demeanor, they can, for an added $100, initiate the “Meat the Belugas” activity, in which the whale in question is promptly butchered and served rare (but not endangered) for up to four guests.

“The aquarium’s not what it used to be,” admitted trainer Jack Orange, 34. “A lot of us are being asked to learn tasks outside our principal roles. Donny, one of our divers, mops the floors three nights a week. Shelly’s had to enroll in night school to learn harpooning. And now they’ve got me butchering belugas.” While recent cutbacks have prompted more traditional initiatives such as fundraising events and slashed budgets, the Shedd has entertained all money-saving measures, workshopping the draconian and vanilla options alike.

“I’ve stopped feeding the penguins name-brand fish,” said Shelly Lindstrom, 29, juggling a soccer ball while several smelt flopped resignedly in her feeding bucket. “We’ve switched over to the ones from Jewel. They smell a little less gross, but they’re saving us tons.” This industrious spirit is echoed throughout the Aquarium, with mixed results. A strict lights-out program in the shark room just lead to them sneaking in waterproof flashlights, temporarily maxing out the Shedd’s credit card. And attempts to slash the salaries of their most dispensable employees lead to the revelation that they were already being paid as little as possible. “It’s frustrating,” said aquarium director Ridley Amphib, 53, “But we’re all problem solvers here. Give me a Sudoku, and I could solve it within five minutes. Any Sudoku, I don’t care what level. Do you have one in your purse? I’ll do it right now.”

“I thought this was going to be a cute animal thing,” said participant Amy Jacobs, 33, nervously eyeing Orange as he sharpened several Messermeister Meridian Elite Stealth Chef Knives in the shallow end of the pool, KeKe splashing happily nearby. “Can I opt out of the whale death part? I guess I didn’t read the contract carefully enough.”

Though the general public was initially hesitant to participate in the fledgling Meet and Meat activity, a target audience soon emerged. “People who aren’t our usual clientele at the Shedd have really taken to the Meat/Meet,” said Orange, shuddering visibly. “They brought a lot of their own equipment in, which is explicitly discouraged. It was a group of sailors who weren’t really used to the positive environment we try to cultivate here. I thought they might want to meet Keke before eating her, but when I brought her out, all one of the guys said was “Towards thee I roll, thou all-destroying but unconquering whale; to the last I grapple with thee; from hell's heart I stab at thee; for hate's sake I spit my last breath at thee.” I guess he thought KeKe had taken his leg in the Atlantic, even though she was raised right here in captivity. Anyway, that was kind of against the spirit of the whole program.”