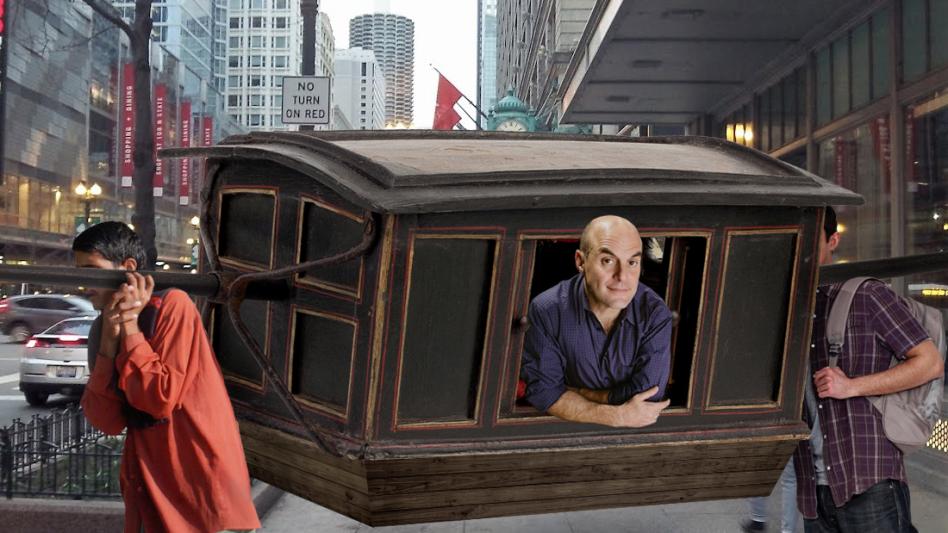 NAVY PIER—Facing pressure from local labor organizers and set against the backdrop of an increasingly contentious national conversation about the ballooning “gig economy,” WBEZ has announced it will be discontinuing its divisive “Peter Sagal’s Palanquin Bearer” internship.

In a crafted statement delivered early this week, WBEZ reported that it was discontinuing the internship as part of an ongoing campaign to reassess the corporate structure of its station. “While many will undoubtedly be sad to see this internship go,” the statement read, “we’re confident that for right now, this is the right move for the WBEZ team moving forward.”

Established concurrent with Sagal’s tenure as the Wait Wait... host in 1998, the palanquin-bearing internship has always been a controversial presence in the radio scene. Detractors claim it cultivates a deeply entrenched culture of favorite-playing and cronyism that’s designed to prey on recent grads, many of whom are desperate for opportunities and come to the city with little more than a dream and a canvas NPR tote bag they got while sophomores in liberal arts college.

However, proponents of the internship insist that many palanquin-bearers go on to do great things—Robert Krulwich’s current cupbearer is a former intern, and innumerable others staff the Gimlet Media ancestral open-concept loft office as scullery maids, rampart guards and more. Especially high profile palanquin-bearers, like Ian Chillag and Mike Danforth of How To Do Everything, will also have the distinct honor of being buried with Sagal in the WBEZ tomb complex when he departs for the next life.

Tom Rudnytzsky, 36, former palanquin-bearer and current Master of Spies for Ira Glass, calls the shuttering of the program “an unconscionable loss” for the public radio community, but did not deign to elaborate more from his smoke-filled chamber draped in muslin and adorned with sketches of the This American Life host’s copious enemies. “Plus Peter gets very tired on account of all his marathon training,” Rudnytzsky hissed as he closed the door. “He needs to keep his strength up.”

And yet labor organizers such as Emily Rathbone, 28, are considering this a victory, even as they insist there’s more work to be done. “WBEZ ending the palanquin bearing internship is obviously a big win for ethical work practices in public radio,” she said, “but it’s only a first step. It’s not just about the interns—it’s about making sure that the Morning Edition janissaries are being given paid leave, or that the Varangian Guard surrounding Soterios Johnson at all times don’t have to live in economic precarity.”

“If we can ensure the pit fighters in the Carl Kasell Memorial Blood Arena are getting healthcare,” Rathbone concluded, “then we’re onto something big. But only time will tell.”