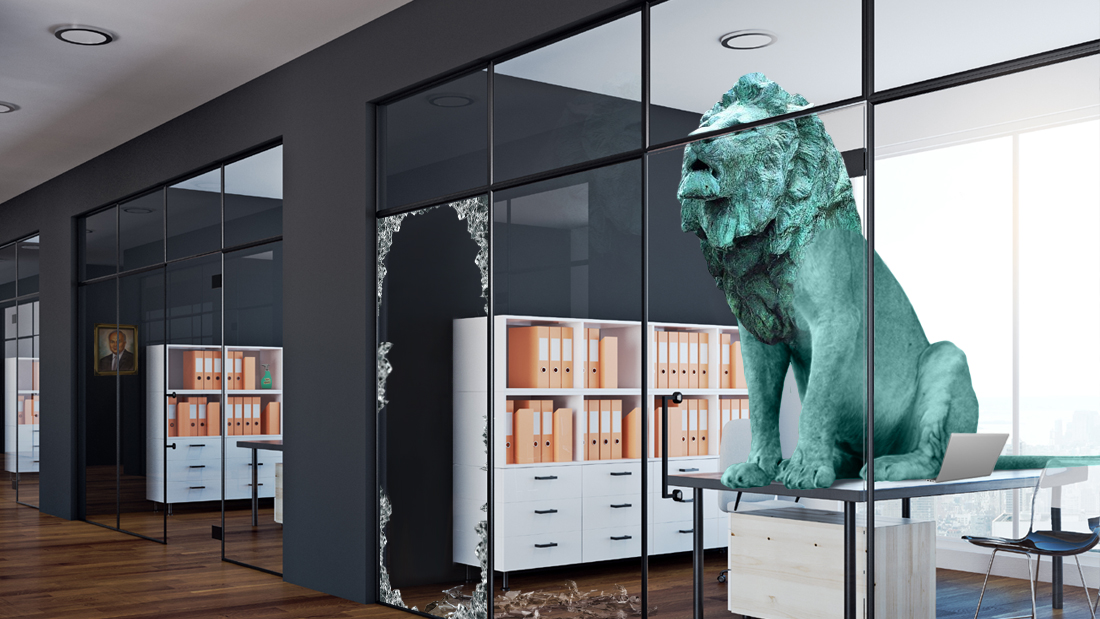 ART INSTITUTE—Disrupting what up until now had been a productive workday, one of the Art Institute of Chicago’s lions was found sitting on the keyboard of museum director Sandra Peters. “He does this all the time,” said Peters, 54, rolling her eyes good-naturedly as she walked through the open-plan office, passing employees nervously handling large spray bottles at catnip-encircled desks. “However much we try to train them, at the end of the day they’re wild animals.”

As assistant curator Alan Silva attempted to coax the 4115-pound lion off of the Dell XPS 13 with a SmartyKat Frisky Flyer toy, Peters started walking towards the closet where the food is kept. “Sometimes if I open the door and shake their food around, they’ll come over and see what I’m doing,” she said, looking behind her to see if the lion noticed where she was going. “I feel bad fooling them, but I do have work to do.”

The lions, given their forever home by the museum in 1894, are beloved members of the Art Institute family. Though conflicts inevitably spring up here and there, no one has ever regretted the adoption. “Sure, I was a little peeved when I found scratch marks in O’Keeffe’s “Black Cross, New Mexico, 1929,” admitted Peters, shaking a cup of dry food in the general direction of her desk, as the lion switched its tail on her computer without showing signs of getting up. “And losing out on a Yayoi Kusama retrospective last year because of her cat allergy was frustrating. But those are sacrifices we’re all happy to make.”

Despite the challenges of keeping pets in a museum full of precious art, the benefits are innumerable. “When adults visit the space, they’re often engaging with the art in a superficial way, behaving the way they think they’re supposed to behave at an art museum,” said Silva, applying Neosporin to a scratch on his toy-carrying hand. “Whereas the lions see the art and react instinctually, whether that’s gouging chunks out of the walls we project videos onto or roaring at a particularly hostile Chagall.”

The lion, squinting its eyes against some unseen beam of light, settled in further on Peters’ desk, knocking several Louise Lawler photographs and an open bottle of San Pellegrino to the floor. “These guys,” Peters chuckled, grabbing a roll of paper towels as leather-clad preservationists scrambled to save the prints from water damage, “They keep us on our toes.”