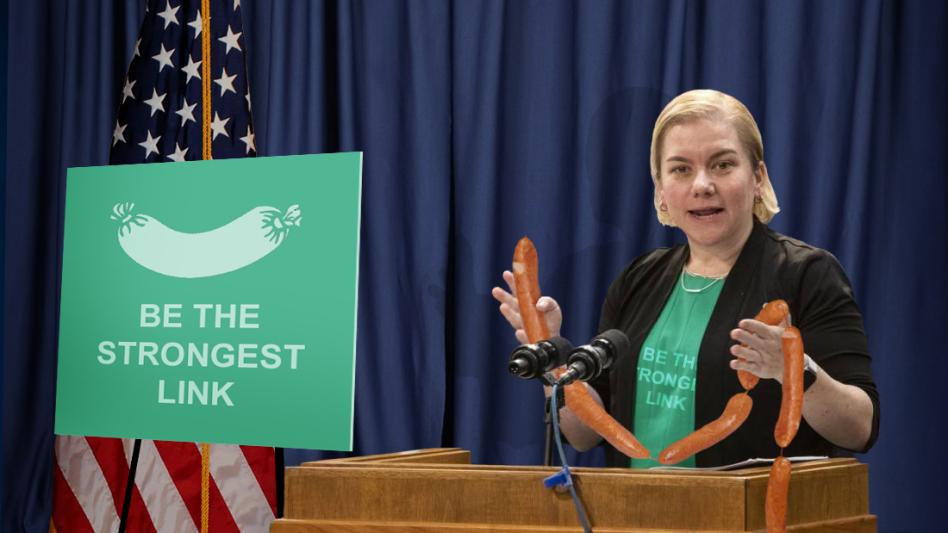 THE LOOP — In the wake of the Coronavirus pandemic and widespread calls for social distancing, city officials are urging Chicagoans to maintain a safe amount of personal space when in public, defined in Chicago-friendly terms as at least the length of eight links of Polish sausage, in a new public service campaign called “Be The Strongest Link”.​

“Although we are urging Chicagoans to stay home if at all possible, we realize that some level of public interface will be necessary for most people in the coming weeks,” said Dr. Alison Arwady, Chicago Department of Public Health Commissioner said in a brief statement Tuesday morning. “There is a lot of conflicting information on how to slow the spread, so that’s why we’re making locally understood recommendations to help Chicago residents visualize how to maintain a safe distance.”

Arwady added, “The length of eight Polish sausages strung end-to-end will provide a minimum safe distance between yourself and others, and is reflective of the CDC’s guidelines on this matter. For those who don’t eat pork, this is equivalent to about nine Vienna all-beef hot dogs.”

City officials say that although most people have heard the CDC’s recommendation that people keep at least six feet of space between themselves and others, there was concern that the average Chicagoan may have trouble visualizing that amount of personal space, having never experienced it in high volume public spaces before.

Additionally, the city is currently working with the CTA to place informational posters aboard trains and buses, reminding passengers of the new guidelines. The city’s “Be The Strongest Link” infographic posters will feature a chart illustrating safe minimum distances in a variety of sausage and wiener types, including Polish, Vienna, Red Hots, and bratwursts.

Arwady’s office also noted that they are working on a secondary version of the “Strongest Link” campaign aimed at vegetarians, which will be released once they can come up with some Chicago-centric foods that don’t contain beef and/or pork.

“We’re currently performing some market research to find out what foods are familiar and relatable for a Chicago-area vegetarian, because we’re just not sure what they eat,” Arwady said. “Currently all we’ve come up with are cheese pizza puffs and jars of giardiniera, and maybe fried perch? Does that count as meat? We’ll continue to work diligently to find a solution for those folks so they can stay safe as well.”