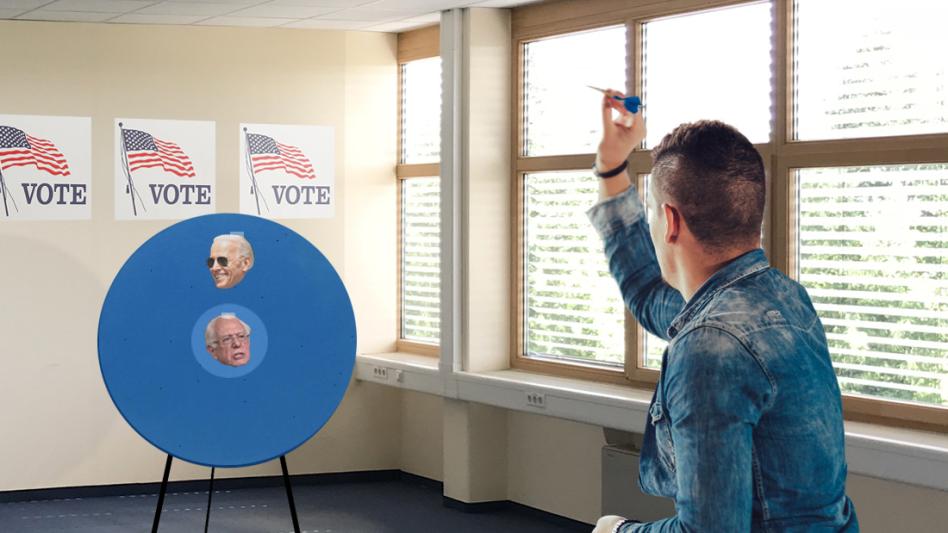 Concerned about the health effects of the new novel Coronavirus, the Illinois State Board of Elections has assured Chicagoans that they’ll still be able to vote in tomorrow’s national and local primaries, albeit with some key changes to the voting process: ditching traditional ballots and polling locations in favor of a system where voters throw darts at a labelled board to cast their vote.

“We’re truly concerned about gathering Chicagoans together tomorrow to vote, but we’re exercising as much caution as possible while still ensuring the machinations of our lumbering democratic process never slow, even for one day,” said Chairwoman Penelope Fasswinder. “We’re already putting people in danger by hosting voting in public schools, libraries, and other places where the paint is lead and the walls are lined with asbestos, so we think these steps that provide some ‘electoral distancing’ between voter and ballot will allow us to safely move forward.”

Chicagoans voting early today were surprised by the changes, and some were critical of the new system. “I had no clue they were going to do a ‘vote by darts’ thing,” said Vance Gong, 29, a server, “I guess I’m glad they’re almost taking this pandemic thing seriously, but...I really suck at darts. My first two votes went into the wall and they said those ‘all count for Joe Biden’? I think I just voted for Joe Biden twice.”

Many early voters were quick to point out that the voting dart boards were seemingly misprinted, with Vice President Biden’s ring taking up much of the board while Senator Bernie Sanders’ takes up a small portion in the center surrounding a third option that says “Win a Prize, Throw Again and also this is a vote for Biden.” Some have also wondered how the many other down-ballot contests are being decided.

“We decided the best way to do this was to just have the Presidential nomination voting as a darts option, and just fill out the rest of the ballot with pre-selected winners. Most of the people coming in here are just here for that anyway. Who even knows the name of one candidate for Board of Review. Name one!” said Fasswinder, lightly shoving this Chicago Genius Herald reporter.

“I’ve been helping people with the darts all day, and I think it’s a success,” said Georgia Bowlen, 67, retired CPS teacher and election judge. “I was nervous about being around crowds at my age, but the darts have minimized my contact with these filthy, filthy voters. The only contact I’ve had with people all day has been while tying their blindfolds.”

“Yeah, we decided it would be better if everyone was blindfolded.” said Fasswinder. “The dart boards have to be positioned along the walls, so it’s pretty hard not to see people voting. The blindfolds provide privacy. And if you manage to hit a bulls-eye, you get this bear!” Fassbinder then held up a stuffed “Teddy Bear,” visibly damp and smelling strongly of hand sanitiser.

“There was a lot of pressure to postpone today for the good of public safety,” said Fasswinder, “But, tomorrow morning Chicagoans will gather together, put on blindfolds, and cast their darts hopefully in the right direction. This is literally the only way forward.”