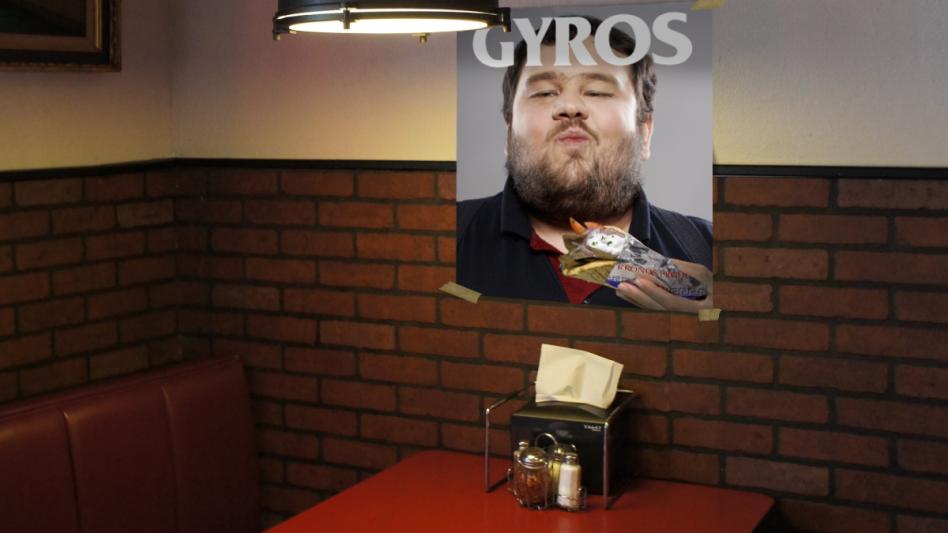 GLENVIEW HEIGHTS — In a move that shakes up decades of established thought in Greek meat rotisserie-based advertising, gyrokone juggernaut Kronos Gyros has just announced that they will no longer use photographs of beautiful, smiling women to advertise their products and will instead pivot to using photos of construction workers with heart disease instead.

“Beautiful women smiling have long been a core part of the Kronos brand, ever since Chris [Tomaras] started the company in 1975,” explained Kronos branding lead Stephanie Christadolou, 45. “He used to stalk around the office in a terrible fury whenever he’d go to a gyro store in the greater Chicago area—which he did 3–7 times a day—and saw one of our posters with a picture of the Parthenon or something on it.

“‘Where are our hot fucking babes?!’ he’d roar,” Christadolou recalled. “He’d get so fired up about it. ‘I only have one fucking task for you people, and it’s making sure people understand that hot women love Kronos brand tzatziki sauce! Fucking Christ!’ He really was a great man and an incredible visionary.”

“However we’ve discovered associating beautiful women with a product mainly designed to give you acid reflux and diarrhea isn’t quite having the intended effect for us,” Christadolou admitted.

“So with the help of our statistics department, we’ve determined that 90% of all gyro meat ends up in the stomachs of construction workers with heart disease and feral cats, and feral cats aren’t known for being high liquidity buyers—yet. Hence, moving forward all Kronos Gyros advertising will feature a slightly pained-looking construction worker, inviting you to imagine that’s what you might look like after eating one of our gyros.”

However, not everyone is pleased about this change in branding.

“Well it’s safe to say this is going to absolutely dogfuck me right in the dick,” said Tricia Knudsen, 56, a talent agent who specializes in connecting conventionally attractive women with meat rotisserie companies for photo shoots. “This is like, my whole thing. How could they do this to me? I used to have a line out the door of BFA graduates begging to get into the gyro game.”

“What am I supposed to do now?” Knudsen demanded. “Hang out at construction sites going ‘oh boys...who wants to make a little cash on the side?’ I guess I’m going to have to! I’m still years away from retirement.”

When asked how they felt about the change, most gyromongers were ambivalent.

“As long as that guy from Kronos doesn’t come in anymore shrieking about how the meat’s not rotating fast enough,” said Tom Santiago, 37, a manager at Red Hot Ranch, “I’ll put up whatever poster they want me to.”