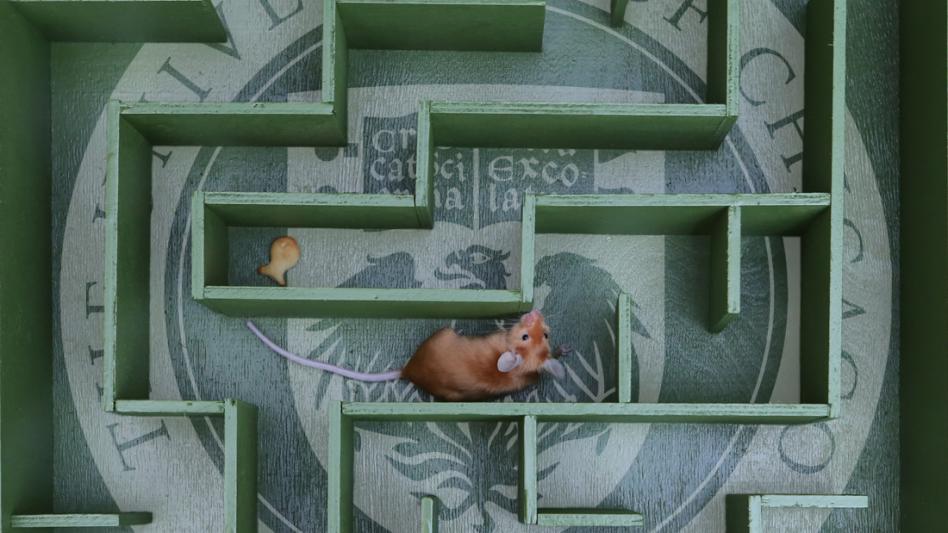 THE UNIVERSITY OF CHICAGO—At an ad-hoc press conference in the University of Chicago Laboratory Center this afternoon, Lab Rat #467649B (scientific name: Bradley), announced his intentions to go left, right, straight, left, and then left again, should the course permit it.

For Bradley, 2 (in human years), this marks the third attempt at the maze since trials began. “This approach is really based off of our failures in the other two runs,” said the rat. “Namely, I’ll go straight this time after the first right, and then take another left after going left a fourth time. Small tweaks, I’m sure you’ll agree,” Bradley added with a wink.

“This is very significant information,” said Dr. Paul Lewis, 44, the head researcher at The University of Chicago Lab Center conducting the experiment. Lewis’ lab is testing the efficacy of Solveitalready, an experimental drug that could reverse some of the effects of brain cancer, give rats the ability to communicate with humans, and more impactfully, make the user really good at mazes. “The maze part is the Big Kahuna. We could really make a difference,” he said.

The high stakes are apparent. “If Bradley fails to get out of the maze, this whole study will have been a complete waste of time, because that means the drug doesn’t help you with puzzles,” Dr. Lewis noted. “And I would really love for this to work, because I have this 1000-piece Globe puzzle I started back in 1996 and I only have like Australia and one of the oceans done. It would be great to have my living room back to normal after two and a half decades.” Dr. Lewis kept going, saying that he now has dozens of puzzles to complete because his guests see the globe puzzle out, and then assume that he likes puzzles.

“Did he talk about that stupid globe puzzle? God, I am so sick of that guy,”  said Dr. Havard Crust, 39, a colleague of Dr. Lewis. Dr. Crust has been outspoken against the Solveitalready trials for what he sees as obvious ethical flaws. “All these rats want to talk about is puzzles—specifically mazes—for some goddamn reason. It’s morally wrong to make me work near these boring conversations. Dr. Lewis is playing God—which is fine—but jeez, there’s more to life than mazes.” When asked how long he’d been involved in the study, Dr. Crust responded, “Oh I’m not, I just like to drop in and give my opinion.”

Regardless of how Bradley performs with his new gameplan, the team plans to move along with the experiment. In the coming days, Bradley will be put through a rigorous series of tests, including a Rubix cube, a “medium” sudoku, and a word search with the theme “out to lunch.” We wish Bradley the best of luck.