Mayor’s Office: “What Chicago Lacks in Protected Bike Lanes, It More Than Makes up for in Ground-up Mixtures of Cyclist Flesh, Asphalt and Twisted Metal” 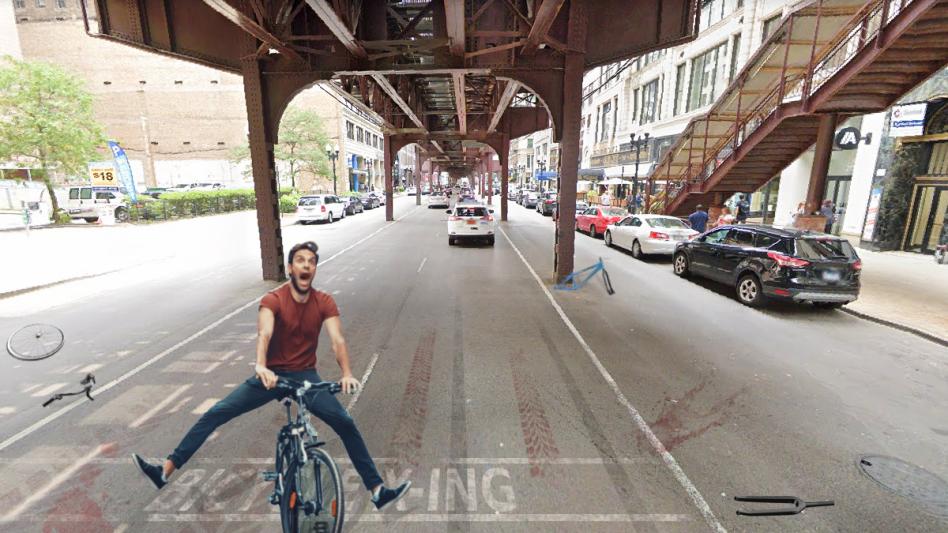 THE LOOP — Despite reports that Chicago lags well behind other cities in the nation when it comes to protected bike lanes, the Mayor’s Office has resisted this characterization by citing Chicago’s strong national lead when it comes to ground-up mixtures of cyclist flesh, asphalt and twisted metal that its current bike lanes produce.

“The Active Transportation Alliance is free to levy whatever charges against us that they want,” retorted Chicago Department of Transportation manager Eugene Kim, 34, when presented with the advocacy group’s findings, “but anyone with a brain can see it’s six of one and a half dozen of the other. These so-called ‘unprotected bike lanes’ are instrumental in producing the bloody skidmarks of flesh, gravel and bike parts that have long been one of Chicago’s greatest tourist attractions!”

“Every day I have people coming to my office, mewling ‘Mr. Kim, we love it when the bikers get pulverized into their constituent parts in order to become one with their hated velocipedes and the beautiful hot asphalt that spreads all over our gorgeous city from early spring to late fall,’” Kim said before putting his feet up on his desk and sipping out of a mug with the text “CYCLE SLAYER” stamped on it in a gory red font.

“Even if we wanted to change these bike lanes,” explained urban designer Ludmilla Conch, 40, “it wouldn’t be a quick fix. Even if we ignore the considerable resistance you’d be certain to get from blood-drunk Chicago natives, it’s not like we can wave a magic wand and make all of our bike lanes safe for cyclists.”

“We’d have to slot it into the current calendar of road improvements,” she continued, “which means pulling multiple beet-red Polish guys off of other projects to stand around assessing each mile of cycle path for four months before finally fixing it in a day. There are currently 200 miles of path in the city so realistically, even if we started this tomorrow, we wouldn’t be finished until sometime in 2087, at which point it’s probably someone else’s problem anyway.”

While protected bike lanes might not be in the future for Chicago, it’s not all bad news. As of press time, an aide had rushed into the Department of Transportation holding a bloody pair of handlebars and breathlessly gasped, “WE GOT ANOTHER ONE, WE GOT ANOTHER ONE,” at which point everyone in the office let out a satisfied “mmm” and sunk into their chairs in quiet ecstasy.