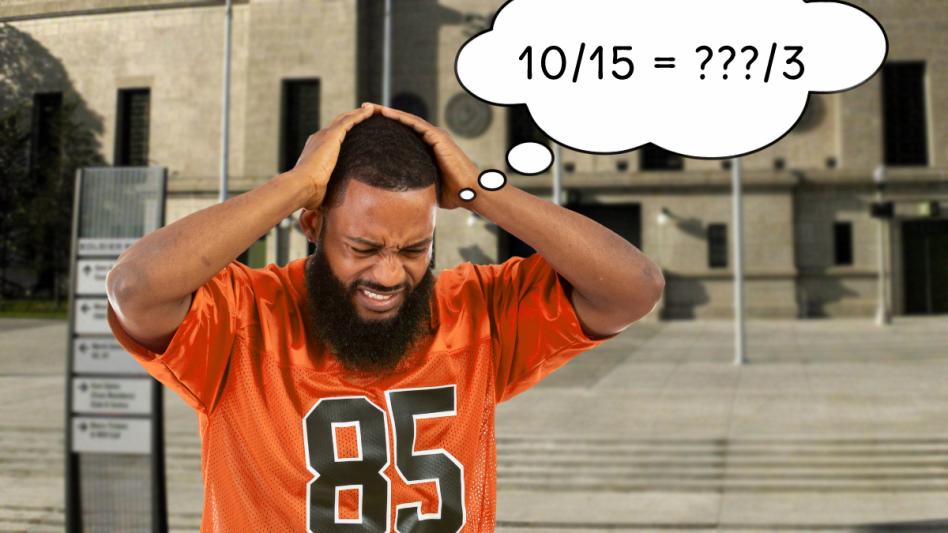 Statistics major Anne Brynn, 20, headed up the study, which she was inspired to conduct after she had an interesting experience buying marijuana. “I met up with my dealer,” she recalled, “and he offered to sell me 5/40ths of an ounce of weed. I responded: ‘you mean an eighth?’ Then he got so confused he passed out and wet his pants. I knew I had to look into this.”

The study was extensive. Of Chicago’s 2.71 million residents, 542,000 participated, or 18/360ths of the city’s population. Canvassers went door to door asking Chicagoans to reduce fractions and finish fraction related phrases, such as, “My favorite item at McDonald’s is the ___ pounder with cheese.” While the intended answer was “quarter (¼) pounder,” a surprising amount answered “9/36ths pounder” instead.

“That last one’s not actually a fractions issue,” said Brynn, “but it’s still really off the mark.”

People were quick to condemn Chicago’s education system for this systemic fractional failure. “Funding for the city’s education is abysmal,” said Bob Pratt, 32, an elementary school teacher for CPS. “Our budget is a fraction of the police budget. I can’t say what that fraction it is, because I was educated in Chicago.”

“Every day I teach math to eighty second graders in a broom closet,” he continued. “I’m doing my best with what I got. Plus, since there’s a teacher shortage, I’m also teaching American history. This week we’re learning about the 6/10ths Compromise.”

When asked if the study reflected poorly on Chicago’s education system, Mayor Lori Lightfoot responded that  It's not an education problem.

“Chicagoans just don’t like reducing,” she explained. “We never reduce our budget. Our recycling program only has two Rs: reuse and recycle. And if a restaurant dares to have an entree with a reduction sauce? Our health department will shut them down. Chicagoans don’t want a reduction sauce, they want gravy.”

The mayor couldn’t take any more questions, saying she had to quell an uprising of CPS teachers, but she promised to speak more on it after the rebelling educators were hanged, drawn, and 9/36th-ed.