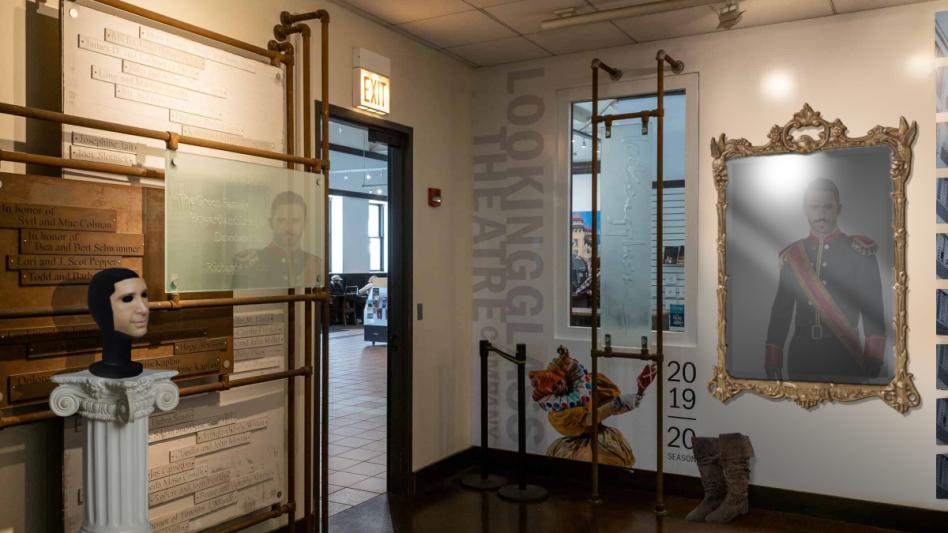 STREETERVILLE — Although initially certain this would only be a mild punishment for his constant dawdling, vain preening and general haughtiness, Prince Thereselemaigne Abeusteuce Fontaine XVI, 39, is reportedly still trapped within Lookingglass Theatre’s enchanted looking glass, and is expected to stay there until Chicago theater returns sometime in 2021.

“We’re deeply regretful that the Prince remains trapped in the enchanted looking glass during this tumultuous time,” a statement from Lookingglass read, “but we can’t do anything about it until we can return to the space and create socially distanced theater. Additionally, the looking glass cannot be removed from the premises so for the foreseeable future the Prince will just have to make himself comfortable.”

Lookingglass Theatre has long been a repository for enchanted artifacts from many of the playhouses around town, from Michael Shannon’s Seven League Boots to David Schwimmer’s original face, but its enchanted Looking Glass remains one of the most potent—and dangerous. Despite this, it’s prominently placed next to the concession area within the lobby.

Prince Fontaine has been trapped within the Lookingglass Theatre Company’s Looking Glass since February 28th, when he accidentally gazed upon it after being exiled from the second act of Her Honor, Jane Byrne by his mother the Dowager Queen Clebertina, 67, for making an awful nuisance of himself in his seat. The haughty prince could not help but gaze upon his own reflection and for this, he was sucked inside with a loud “pop!” noise.

“Yeah, haughtiness is probably the number one culprit when it comes to getting trapped in the looking glass,” said Lookingglass’s resident magical curio keeper Zane Twisby, 34, currently on indefinite furlough from the company. “It kind of...beckons to them, I guess.”

“Every once in a while you get a corn-fed University of Oklahoma student who looks like they fell off the back of the turnip truck who doesn’t know any better,” he added, “but about 90% of the people we have to pull from that thing are 6’3” blonde guys named Will who went to Northwestern, have exclusively worked with Jackalope and think they’re one semester at the School at Steppenwolf away from being an ensemble member in the company.”

With a diplomatic emergency rapidly unfolding between the city and the Prince’s homeland, Mayor Lori Lightfoot is expending all possible resources towards finding a questing hero who is true of heart and fair of face, but with the bottoming out of the questing hero economy in 2017, the Mayor’s office is also reportedly looking into nontraditional solutions involving tricksters, charlatans and simpletons, as well as princesses dressed up as commoners to escape stifling, retrograde and degrading gender roles.

Until then, however, the Prince will just have to sit tight.