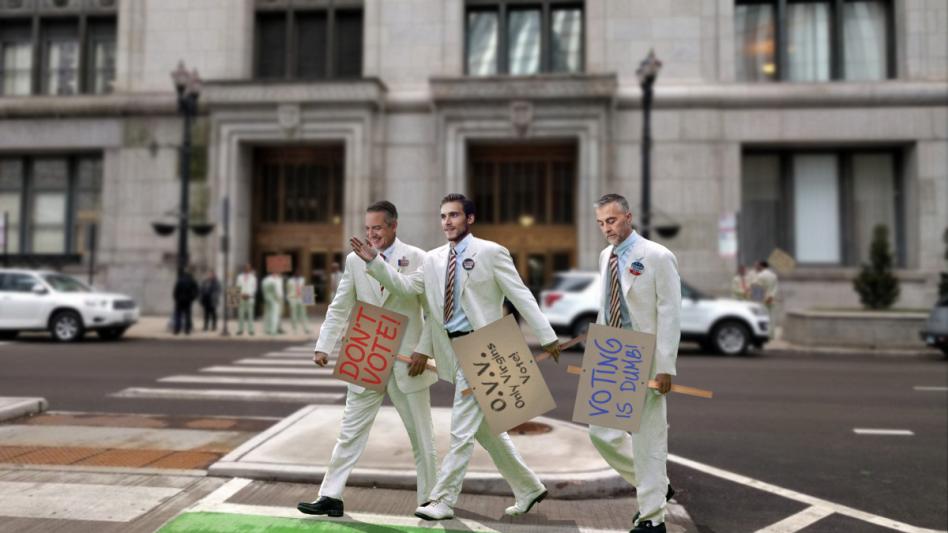 Through a series of online, print, television and radio ads that began running early this past weekend, the Republican party reminded Americans of the faux-pas of wearing white and voting after Labor Day.

“It’s just so gauche,” said Marina Sinclair-Vinehoffman, a GOP strategist and niece of someone rich enough to pay every news outlet $10,000 to never mention them by name. “White pants and shoes are kicky Summer fashions all Americans should enjoy, but when Labor Day comes and goes it’s time to have the help put them back in storage! It’s also the best time to put away those wild, Summer-time notions of contributing to a democracy!”

The “Red, White, and Blue and Also Don’t Vote” campaign launched early on the Friday before Labor Day, hoping to remind Americans of the seasonal fashion tradition and to discourage anyone from voting for any office in the upcoming November elections.

“It’s never been more important for us to come together as Americans and celebrate the traditions that bind us,” said Sinclair-Vinehoffman, “And by that I mean, like, the ‘don’t wear white’ thing. The ‘not voting’ thing is something new we should try out at least this year.”

In an election cycle marked by numerous accusations of potential voter fraud by the Republican party and President Donald Trump, calls for Americans to skip voting entirely have become more common as the election draws closer. When asked if lower turnout would benefit the Republicans and Trump’s reelection campaign, numerous GOP representatives told this Chicago Genius Herald reporter “no shit,” “duh,” and “we literally say this on TV all the time, it’s not a fucking secret. You never listen...we should break up.”

“Look, we’re certainly not saying people can’t vote,” said Sinclair-Vinehoffman, “We just want people to know that as of Labor Day it’s no longer fashionable. If you vote, it’s likely that your neighbors and friends are going to talk behind your back about how tacky you are. You know how people are wont to talk and gossip!”

Posters and billboards for the “Red, White, and Blue and Also Don’t Vote” campaign prominently feature individuals in white pants, wearing “I Voted” stickers and being mocked by more fashionable, attractive, and younger Americans. In many posters, the voters have clearly soiled their white pants with urine and/or feces.

“I almost left the house yesterday in a pair of white, linen capris,” said William Fontaine, 48, a wholesale auto parts salesman, “but then my daughter showed me this poster with this poor bastard just getting roasted by his friends. You could tell they were really letting him have it because they all were pointing and laughing and holding up their hands to make ‘Ls’ on their foreheads. Let me tell ya, I went upstairs and changed immediately. And I’m not voting either. I can’t lose any more credibility with my family or my wife is going to leave me.”

“Now I know what you’re thinking, you little media stinkers,” said Sinclair-Vinehoffman, “if people can’t wear white or vote after Labor Day, when can they start wearing white and voting again. Don’t come at me with your fancy, ivory tower degrees and Gremlins logic traps. You can wear white again when it’s Summer, and you can vote again when we say it’s alright, do we understand each other? Now get out of here, your clothes are gouging my eyes with their tackiness.”