A Compromise: We Can Solve This CPS Labor Dispute By Cutting All The Students in Half 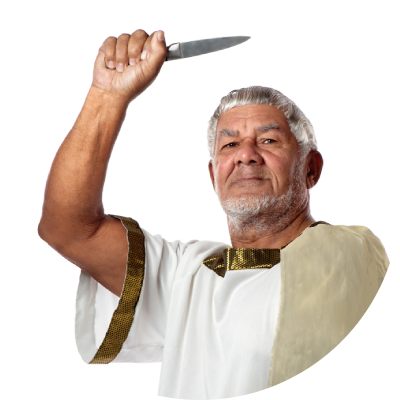 Today marks the second day of the CPS teachers’ strike here in Chicago, with teachers and their supporters on one side and city officials and people who worry constantly about their taxes on the other. Today the schools are closed and the children of Chicago are roaming the streets, bored and with nowhere to secretly vape. I, the wise King Solomon, have looked upon this conflict and have issued my judgement. We must cut every child in Chicago in half.

Truly, my wisdom is mighty and my judgement is fair! To solve this strike we must take a large, ceremonial sword and cut every student enrolled in public school in half, but on a horizontal plane, not vertical because they’d all die. If we just cut off their legs, only some will die, but others will thrive as my plan makes Chicago’s public school system the envy of the world.

If every child in Chicago is cut in half, there will be many benefits to both parties in this strike. For the teachers, there will be smaller class sizes, both in number and size of student. It’s just common sense: people cut in half take up less space. Additionally—and I say this from experience—many will not “pass” their surgery “placement exam.” This means a smaller, more streamlined student body—figuratively and literally—and that means more money for services like counselors, librarians, and nurses. Nurses will definitely be important.

For Chicago’s city officials, the benefits will be a generation of docile, legless children who’ve gotten the most out of their education. They’ll have learned the lesson of Solomon’s wisdom: adults sometimes must put broad, economic concerns over the welfare of children. True, the standard of living for all of Chicagoans could be raised, but to be king—or mayor—one must focus more on the enduring legacy of institutions like a cop academy or turning Lincoln Yards into a Xanadu-style stately pleasure dome. These are the legacies that stand the test of time, unlike people who die. Especially when cut in half.

You’re probably thinking “Ah, King Solomon, wisest of kings, builder of the First Temple, wearer of the Seal of Solomon, I see what you’re doing: you’re waiting for us to step forward and acknowledge our own selfishness in the face of teachers’ numerous sacrifices by putting our children in harm’s way!” to which I respond no!! I just really want to cut some kids in half! In the story of my greatest child-endangering ruling, I was totally ready to cut that baby in half for those two mothers. It’s a great way for them both to have half a dead child! It was only that one woman backing down like a coward that stopped me!

Chicago, don’t blink in the face of the teachers’ union saying a sixteen percent pay bump over five years isn’t enough to survive in a major city, and that class size increases and lack of resources and auxiliary staff make any pay raise not worth the added strain on their already difficult careers! Teachers, don’t back down as the city calls you greedy or rude nicknames like “chalk hands,” “apple eaters,” or “easily replaceable by an iPad with internet access.”

Let me fix this problem for everyone by bisecting all your children with a large, damascus steel scimitar beset with silver and gems! This conflict could stretch on for days, and pretty soon you're all going to get sick of having your kids around the house anyway. KING SOLOMON HAS SPOKEN!