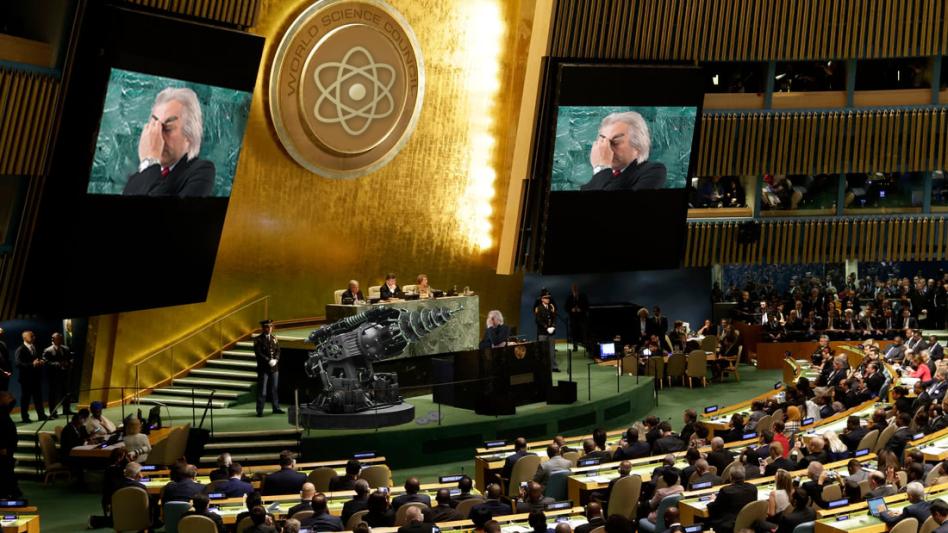 WORLDWIDE — Rogue scientist Dr. Wilhelm Scull addressed the world today via satellite take-over to deliver a dire, strongly worded message. “Peoples of the Earth,” he began from an undisclosed location, “come on….what are we doing here? Geez, fuckin’ hell. This sucks.” Dr. Scull continued to hem and haw for what seemed like forever before finally confronting the world.

“It’s like...I don’t even know what to say here. It just sucks to have to say this, you know?” During the nearly forty-five minute, pause-laden confrontation he made multiple appeals for understanding to his skull-helmeted henchmen gathered behind him. “You guys know, right? Like, I’m not being an asshole here, right?”

Dr. Scull then outlined a list of demands he’d like the world to do better on, pausing multiple times to insist “that they’re not demands, so much as they’re me begging you to at least try.” Dr. Scull’s list included “try not posting on social media about the things we’re doing if he’s not invited” and “not clicking ‘interested’ on his Facebook event for his one man show if we’re not even going pretend we’ll show up.”

Gesturing to the glowing machine behind him, Dr. Scull began to grow more irate “are you even going to comment on this? The death-ray I’ve mentioned I was working on? It’s done, not that you care. It’s like, what do I have to do to be worth a little respect from you?” Dr. Scull then sat on the floor of his lair, giving the rest of his address while lying on his back on the floor. “Fuck, what am I even doing here? You just keep repeating the same cycle over and over, Wilhelm, expecting you all will change. I can’t do this anymore. I’m not mad, I’m just disappointed to be treated this way.”

Powering down the laser weapon and wiping his eyes with a handkerchief provided by a henchman, Dr. Scull vowed to block the Earth’s number, but wished mankind well and conveyed a hope that we’ll “grow as people.”

“It’s just, wow, it really felt good to get this off my chest, you know?” He concluded before returning satellite control.